The average as well as current GDP(PPP) growth rates of South Asia and East Asia & Pacific exceed all other global regions.  These two regions account for 42.4% if the World's GDP(PPP) and exceed the North America GDP(PPP)  by 259%.
South Asia and East Asia & Pacific total GNP(PPP) accounts for 57.6% of the totals from all other regions.
Preliminary conclusion: A shift from North American trade (e.g. 16.4%) to Asia (e.g. 57.6%) offers attractive opportunities. 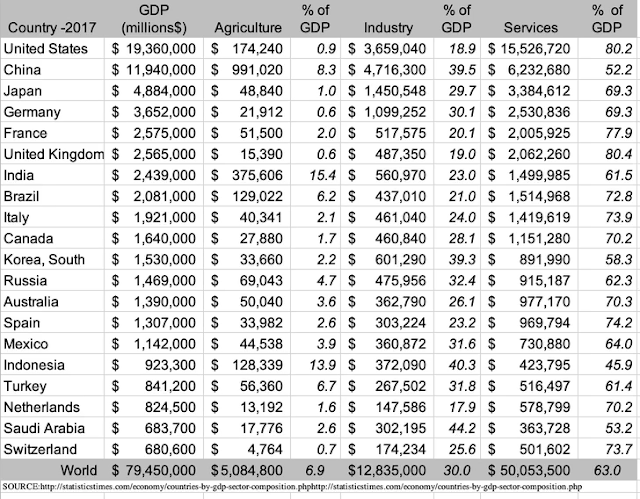 Services amount to 63% of the global GDP with China (at 52,2%) still lagging in the global competition. Only India (15,4%) and Indonesia (13.9%) have a high share of GDP in agriculture. The US and UK (with 80%) of services are highly dependent on services.

The population growth for both USA and China is less than a half for the world.

One of the key indicators of future growth is the penetration of the Internet:

There are large differences in the penetration of Internet:

More than twice of the world's population shows a low level of internet penetration (e.g. 28%) as compared with high levels (e.g. 83%).