While productivity growth has been declining since a boom in the 1960s in the United States and much of Western Europe, that decline accelerated after the financial crisis.

Few topics in economics today generate as much debate as the productivity-growth slowdown in advanced economies. While productivity growth has been declining in the United States and across much of Western Europe since a boom in the 1960s, that decline accelerated after the financial crisis. Exceptionally weak productivity growth in recent years has raised alarms at a time when advanced economies depend on productivity growth more than ever to promote long-term economic growth
and prosperity. In an age of digital disruption, when companies are focused on implementing digital solutions and harnessing innovations such as automation and artificial intelligence, disappearing productivity growth is even more puzzling. Yet for some time now, the only consensus about what is behind this weakness is that there is no consensus, leaving decision makers in both the private and public spheres without a clear perspective from which to chart a path forward.

This posting is based on: https://www.mckinsey.com/featured-insights/regions-in-focus/solving-the-productivity-puzzle

xxxxxxxxxxxxxxxxxxxxxxxxxxxxxxxxx
While there are many schools of thought, we find three waves explain those patterns and
the decline.
ƒƒ Wave 1: The waning of a productivity boom that began in the 1990s dragged down productivity
growth by about one percentage point. Around 2005, a decade-long productivity boom from a
PC, software, and database system ICT revolution and the restructuring of domestic operations
and global supply chains was ending. By then, retail supply chain management tools were
broadly implemented and manufacturing offshoring momentum slowed.
ƒƒ Wave 2: Financial crisis aftereffects, including weak demand and uncertainty, caused another
percentage point drag. After the crisis hit, sectors such as financial services went from boom
to bust, and companies reacted to weak demand and uncertainty by holding back investment,
driving capital intensity growth down to the lowest rates since World War II. Weak demand further
depressed productivity growth through negative economy of scale effects and downshifts in
product and service mix.
ƒƒ Wave 3: Digitization, often involving a transformation of operating and business models, promises significant productivity-boosting opportunities but the benefits have not yet materialized at
scale. This is due to adoption barriers and lag effects as well as transition costs; the net effect on
productivity in the short term is unclear.

Patterns indicate that the productivity-growth slowdown is broad-based across countries and sectors, point to a set of common, overarching factors at work, and reveal the importance of demand-side as well as supply-side factors: 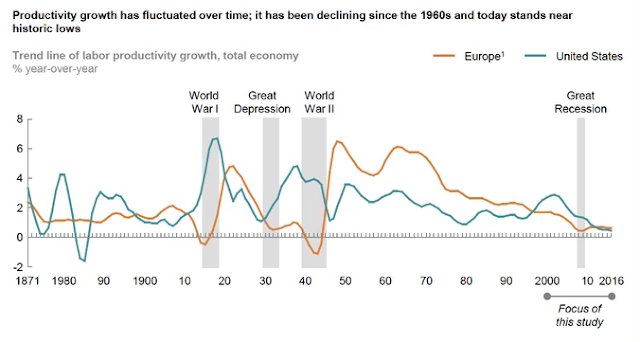 Since the Great Recession, capital intensity, or capital per hour worked, in many developed countries
has grown at the slowest rate in postwar history. Capital intensity indicates access to machinery, tools,
and equipment and is measured as capital services per hour. An important way productivity grows is
when workers have better tools such as machines for production, computers and mobile phones for analysis. 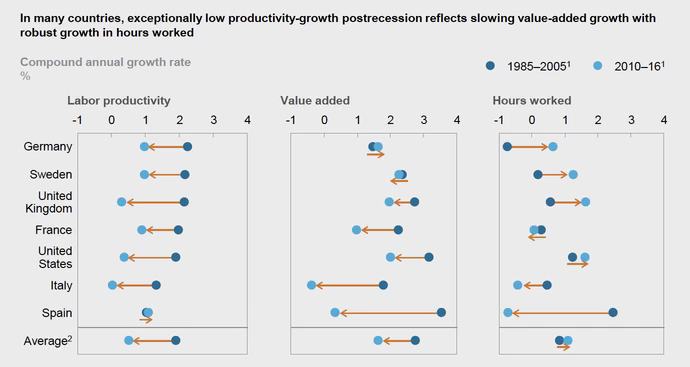 Analysis represents a decomposition and is not a causal analysis, and is sensitive to the underlying growth accounting formulation. 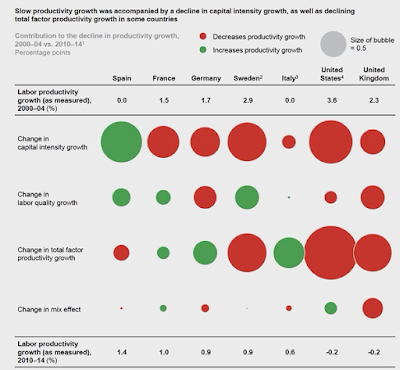 Demand for goods and services across countries and industries dropped sharply during
the financial crisis as people lost jobs, income contracted, and the credit impulse reversed.6
This fall in demand for goods and services resulted in significant excess capacity
and a pullback of investment. At the same time, in many countries, companies reacted to
the demand shock by cutting hours worked, particularly in sectors like manufacturing, retail,
finance, and construction. The contraction of hours was so dramatic in the United States
that it briefly increased productivity growth in 2009 and 2010. 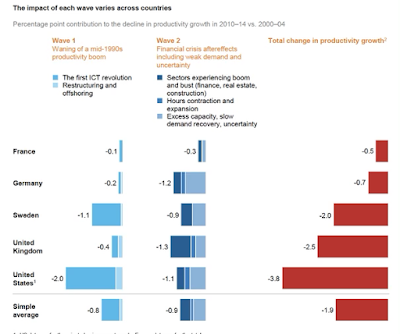 While improvements in material living standards are important, the size of the overall economy matters, too. In a world where demographic headwinds are slowing the pace at which employment growth can occur, productivity growth becomes crucial to increase overall economic growth.

Income inequality has increased in both Western Europe and the United States, particularly
in the pre-crisis period. Widening income inequality can reduce consumption and demand
across a broad range of products by shifting incomes from lower-income households with
a higher propensity to consume to higher-income households with a lower propensity to consume.   We estimate that rising income inequality since the mid-2000s, including  the effects of declining labor share of income, has acted as a constant moderate drag on overall household spending in all countries. 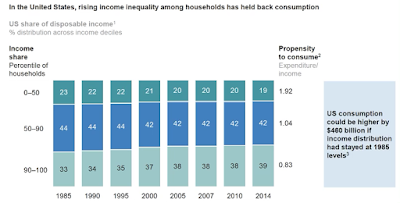