# 159 Global Status of US Millionaires

The United States leads the global wealthy population with 80,510 millionaires or a total of 48% of the world total number of millionaires. China ranks second with 18,130 very wealthy individuals. 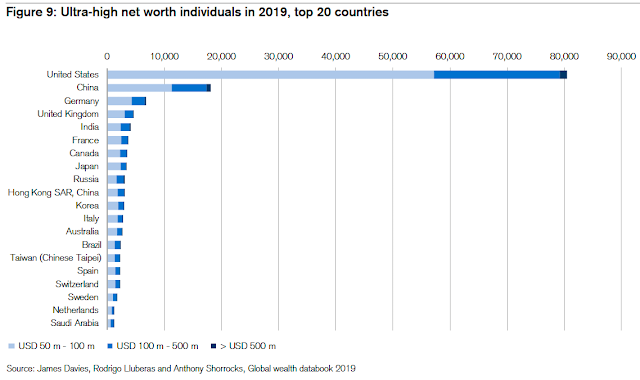 The chart below suggests that there is large concentration of U.S. millionaires in 2019. The U.S. has 38.9% of wealth holders among the top 1% of wealthy people:

The dominant position of the U.S. also becomes apparent when compared with other countries: 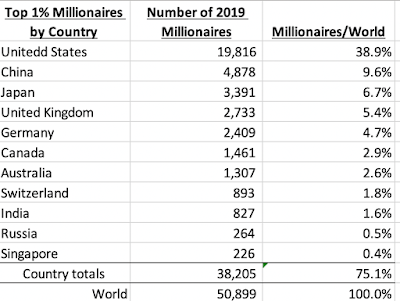 The dominant position of U.S. wealth becomes even greater when further comparisons are made on the basis of the $s possessed by millionaires: 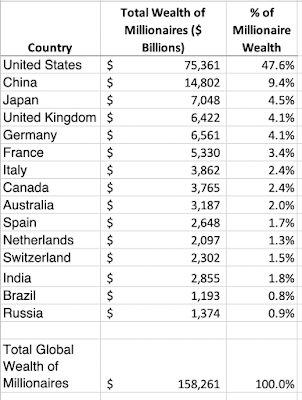 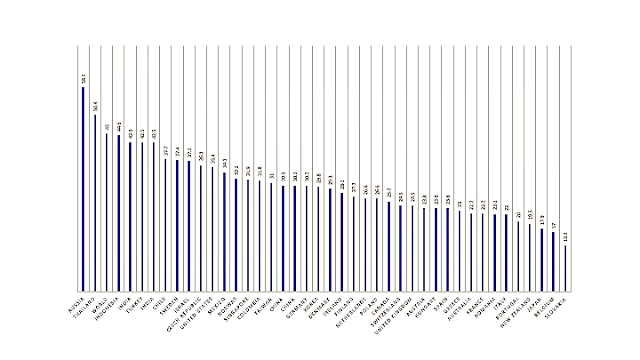 The USA does not rank on the top of the 1% wealthy adults. Russia, with 58.2% of total wealth, ranks with the largest share. In the order of wealth is only the 12th country. Consequently, the shares of wealth held by the top 1% of the population is not extraordinary.

U.S. millionaires held 47.6% of the entire wealth that is possessed by all global millionaires. The concentration of wealth in the USA has not only dominated every other country but also keeps gaining.

Another way of viewing the inequality in the accumulation of wealth is to consider that millionaires constitute only 0.9% of the global adult population of 5.1 billion.  Millionaires now hold
$158 trillion of total global wealth. That is  44% of all the wealth created so far in all of history.

With 2.8 Billion people living at poverty levels (or 57% of mankind) we find that global millionaires have acquired a disproportional possession of available wealth.  When comparisons are made with other countries the extent to which wealth is concentrated does not appear to be extraordinary except in the cases of Portugal, New Zealand, Japan and Belgium where the reported concentrations of wealth in the hands of the top 1% falls below 20%.

The share of that wealth that is possessed by U.S. millionaires represents the greatest accumulation of economic privilege that has been ever assembled. The question is whether such privileges are sustainable. We do not think that is possible. The world is currently at a threshold of revolutionary changes in politics, demographics, education and technologies.