According to the U.S. Geological Survey (USGS), in 2018, China accounted for 71% (and possibly higher due to illegal mining, production, and smuggling in China) of global REE production in
terms of quantity. Chinese data indicate that its REE exports totaled 53,518 metric tons, with a value of $517 million. China’s top three REE exports markets by value were Japan (54% of total), the United States (14%), and the Netherlands (8%). China also exported $1.7 billion worth of magnets containing REEs (including $201 million to the United States), an indicator of the significance of Chinese downstream industries that utilize REEs. 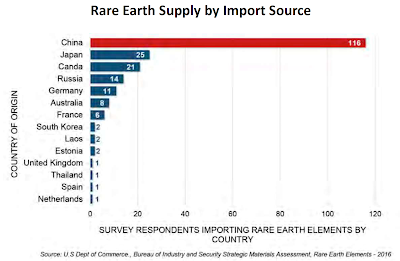 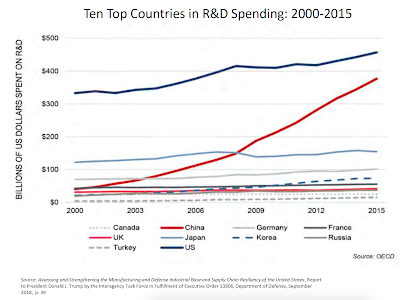 China is non-compliant with some of its World Trade Organization (WTO) obligations.
• Recognizing that “Made in China 2025” and OBOR have sparked concerns about China’s intentions, China’s leaders have softened their rhetoric when promoting these programs without altering the programs’ fundamental strategic goals.
• China continues to operate as a centrally controlled, planned economy. China restricts inbound investment, limits other countries’ exports, and pursues state guided investment overseas, including in strategic sectors. 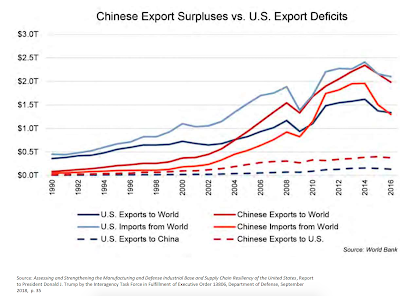 2018 - April 26: China’s president urges China to speed up its semiconductor strategy in the face of  foreign pressure and growing tech demands.
• 2017 – July, December: Ministry of Industry and Information Technology issues document on goals for development of artificial intelligence from 2018 to 2020, and the top leadership’s vision for a new Chinese economy in the age of AI. China will be able to mass-produce neural-network processing chips.
• 2016 – March: Draft outline of the 13th Five-Year Plan (2016-2020) on national economy and social development presented on Saturday to the Fourth Session of the 12th National People's Congress with more than 21 goals for civilian and military development of technology along with the “Made in China technology plan.”