For the past decade, global wealth creation has centered around China and the United States.
In 2019 the United States extended its unbroken spell of wealth gains, which began after
the global financial crisis in 2008. The United States also accounts for 40% of dollar millionaires
worldwide and for 40% of those in the top 1% of global wealth distribution. Wealth in China
started the century from a lower base, but grew at a much faster pace during the early years. It
was one of the few countries to avoid the impact of the global financial crisis. China’s progress
has enabled it to replace Europe as the principal source of global wealth growth and to replace
Japan as the country with the second-largest number of millionaires. More tellingly, China
overtook the United States this year to become the country with most people in the top 10% of
global wealth distribution.

This posting is based on https://www.credit-suisse.com/about-us/en/reports-research/global-wealth-report.html


The wealth growth spurt in 2017 evoked memories of the “golden age” for wealth during the
early years of the century, when annual growth averaged 10%. However, it was not sustained. Total global wealth reached USD 351.5 trillion at end-2017, but then dipped to USD 345.4 trillion at end-2018 before recovering to USD 360.6 trillion in mid-2019. 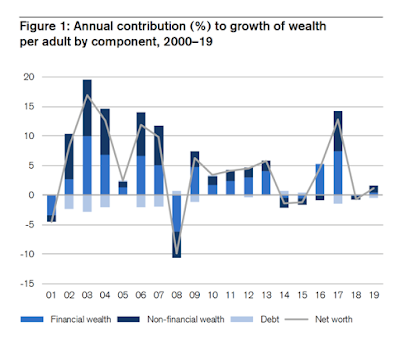 Comparing total wealth gains and losses across the most important countries, the United States
(USD 3.8 trillion) again leads the way by a considerable margin, continuing an astonishing
spell that has seen wealth per adult increase each year since 2008 (however, even the United
States is not immune to temporary blips: wealth per adult fell by 2% during the latter half of
2018, then recovered during the first half of 2019). China (USD 1.9 trillion) is in second place. 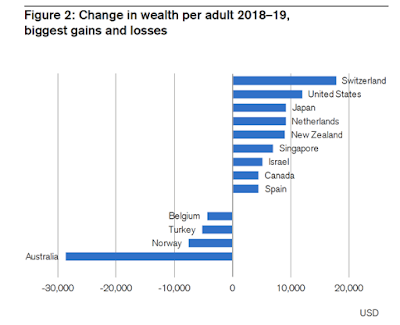 The world wealth map captures the huge differences in average wealth across
countries and regions. Nations with wealth per adult above USD 100,000 are located in North
America, Western Europe, and among the richer Asia-Pacific and Middle Eastern countries.
Switzerland (USD 564,650) again tops the ranking according to wealth per adult, but
our revised estimates now place Hong Kong SAR, (USD 489,260) second, followed by the
United States (USD 432,370) and Australia (USD 386,060). New Zealand, Singapore,
Canada, Denmark, the United Kingdom and the Netherlands occupy the remaining slots in the top ten. 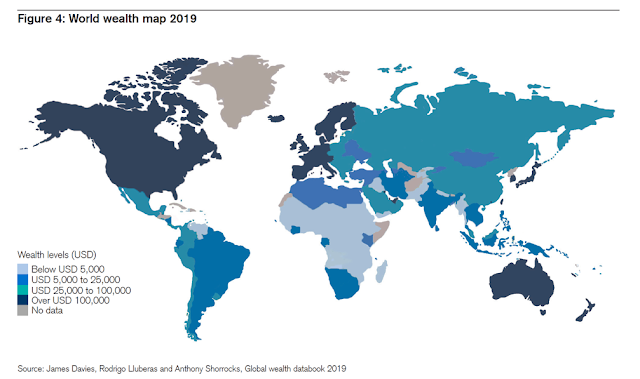 Variation in average wealth across countries accounts for much of the observed inequality
in global wealth, but there is also considerable disparity within nations. To determine how global
wealth is distributed across individual adults, we combine our estimates of the level of household
wealth across countries with information on the pattern of wealth distribution within countries. 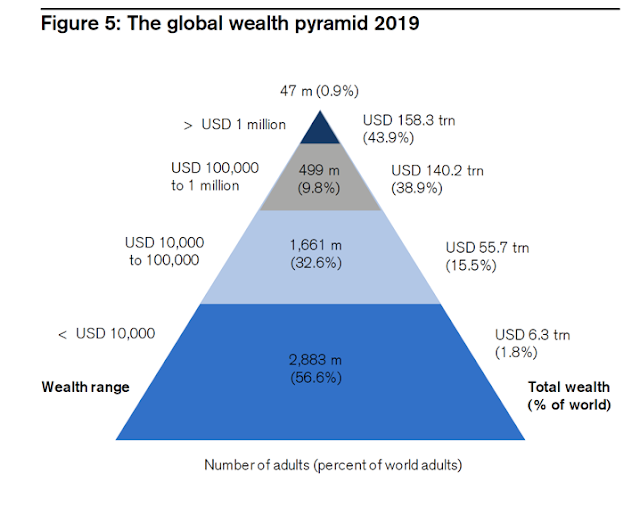 The wealth pyramid captures the wealth differences between adults. The large base of low-wealth holders underpins higher tiers occupied by progressively fewer adults. We estimate that 57% of all
adults in the world – have wealth below USD 10,000 in 2019. 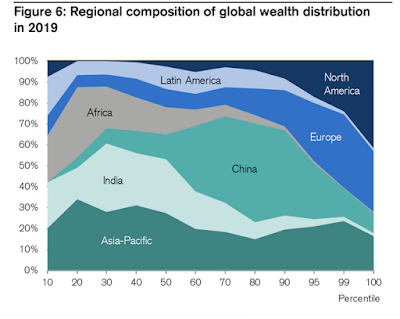 The regional composition of wealth be explored further by assigning adults to their corresponding global wealth positions. Our calculations indicate, for example, that a person needs net assets of just USD 7,087 to be among the wealthiest half of world citizens in mid-2019. However, USD 109,430 is required to be a member of the top 10% of global wealth holders, and USD 936,430 to belong to
the top 1%. Determining global wealth percentiles in this way enables the regional membership
of each global decile (i.e. 10% slice) to be portrayed.

For any given country, the number of millionaires depends on three factors: the size of the adult
population, average wealth and wealth inequality. The United States scores highly on all three
criteria and has by far the greatest number of millionaires: 18.6 million, or 40% of the world
total (Figure 7). For many years, Japan held second place in the millionaire rankings by a
comfortable margin. However, Japan is now in  third place with 6%, overtaken by China (10%). 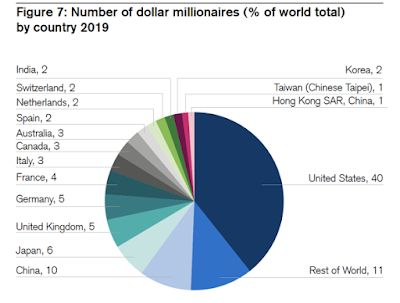 The methodology we employ allows us to examine the distribution of wealth within the HNW
group in more detail. Our calculations suggest that the vast majority of the 46.8 million millionaires
in mid-2019 have wealth between USD 1 million and USD 5 million: 41.1 million or 88% of
the HNW group (Figure 8). Another 3.7 million adults (7.9%) are worth between USD 5 million
and 10 million, and almost exactly two million adults now have wealth above USD 10 million.
Of these, 1.8 million have assets in the USD 10–50 million range, leaving 168,030 Ultra High
Net Worth (UHNW) individuals with net worth above USD 50 million in mid-2019. 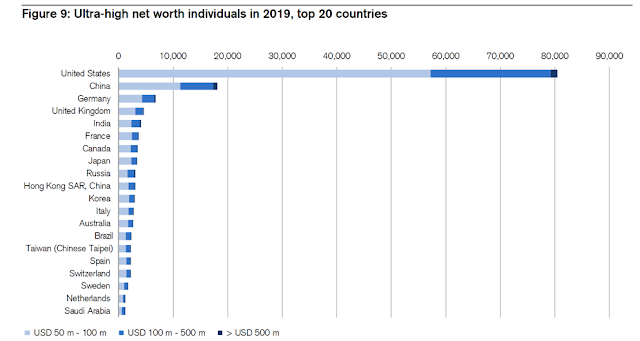 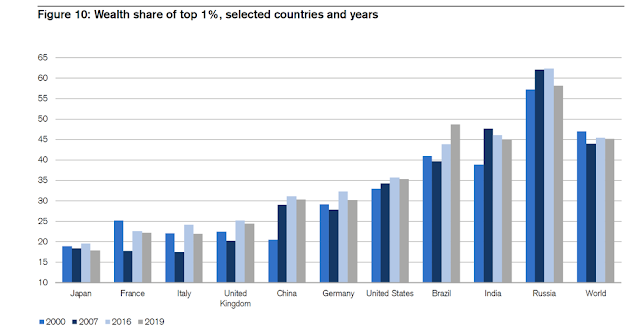 The level and trend of wealth inequality is monitored closely as an indicator of broader social
trends. There is no doubt that the level of wealth inequality is high, both within countries and for
the world as a whole. For example, the bottom half of adults account for less than 1% of total
global wealth in mid-2019, while the richest decile (top 10% of adults) possesses 82% of
global wealth and the top percentile alone owns nearly half (45%) of all household assets. Wealth
inequality is lower within individual countries: typical values would be 35% for the share of the
top 1% and 65% for the share of the top 10%. But these levels are still much higher than the
corresponding figures for income inequality, or any other broad-based welfare indicator. 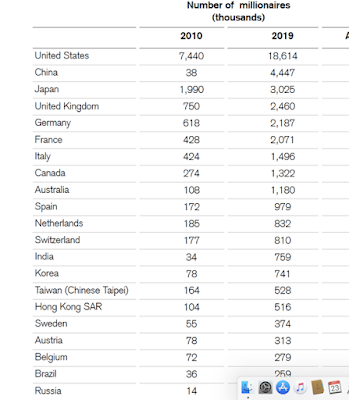 The rising average wealth was responsible for 78% of the increase in  the number of millionaires. Population growth accounted for 16% and increasing inequality for 6%. Thus the general rise in wealth and population accounts for most new millionaires, while increased inequality in the distribution of wealth within countries accounts for a relatively small number. The small contribution of inequality may surprise some people, but the reasons are clear on reflection. For example, if the wealth of every individual doubles, then relative inequality remains unchanged. But the number of millionaires  will rise dramatically, probably more than doubling, because everyone with at least USD
500,000 previously will now be promoted to the millionaire group.

Global wealth is projected to rise by 27% over the next five years, reaching USD 459 trillion by 2024. Low- and middle-income countries are responsible for 38% of the growth, although they account for just 31% of current wealth. Growth by middle-income countries will be the primary driver of global trends. The number of millionaires will also grow markedly over the next five years to reach almost 63 million, while the number of UHNWIs will reach 234,000.

The Wealth of the USA

The United States economy continued to grow. Important drivers have been low interest rates and a large tax reduction. Average wealth was USD 211,000 in 2000, and rose fairly steadily until 2006, before falling during the global financial crisis. Wealth per adult has now fully recovered, and is 45%
above the 2006 level. The rising tensions and uncertainties that have been experienced in the United States over the last few years may be reflected in the recent deceleration of wealth growth. Wealth per adult rose just 3% in the 12 months to mid-2019, compared to an average annual increase of 5% in the previous five years.

The United States has a high proportion of assets (74%) reported as financial, partly because it includes business equity wholly as a financial asset. Adopting the more usual procedure of treating unincorporated enterprises as part of the household sector, the share would be around 65%,
which is still relatively high. It also has more outward foreign investment.

The United States has a high fraction of adults with wealth above USD 100,000 compared to the world as a whole. The percentage of people with wealth at higher levels is even more
striking. The United States has the most members of the top 1% global wealth group, and currently accounts for 40% of the world’s millionaires. The number of UHNW individuals with wealth above USD 50 million is about four times that of the next country, China.

This report looks at the evolution of  wealth inequality. The bottom half of wealth holders collectively accounted for less than 1% of total global wealth in mid-2019, while the richest 10% own 82% of global wealth and   the top 1% alone own 45%. Global inequality fell during the first part of this century when a  narrowing of gaps between countries was reinforced  by declining inequality within countries.

While advances by emerging markets continued to narrow the gaps between countries, inequality within countries grew as economies recovered after the global financial crisis. As a
result, the top 1% of wealth holders increased their share of world wealth.