It is important to take a longer-term view of global economic prospects that looks beyond the short-term ups and downs of the economic and political cycle. This posting focuses on the fundamental drivers of growth: demographics and productivity, which in turn is driven by technological progress and diffused through international trade and investment. The contents of this Blog posting an assembly of data from the firm PriceWaterhouseCoopers;
https://www.pwc.com/gx/en/issues/economy/the-world-in-2050.html 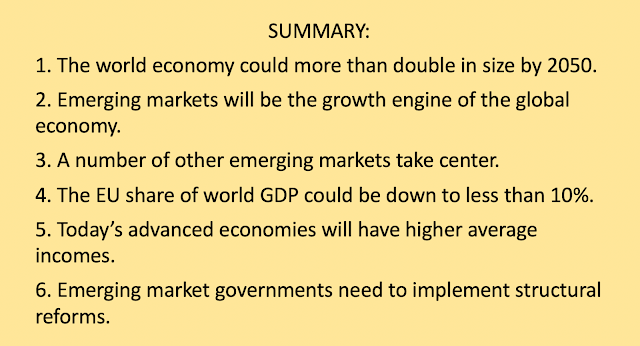 A Long View of the 2050 Global Economy

Emerging economies will dominate the 21st century. By 2050 we project China will be the largest economy in the world by a significant margin, while India could have edged past the US into second place and Indonesia have risen to fourth place. The EU27’s share of global GDP could have fallen to below 10%. The world economy will more than double in size between now and 2050, far outstripping population growth.

Emerging markets will dominate the world’s top economies in 2050 (measured in PPP GDP): 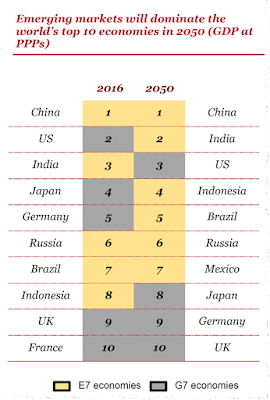 Within 34 years the US and Europe will steadily lose GDP rank to China and India: 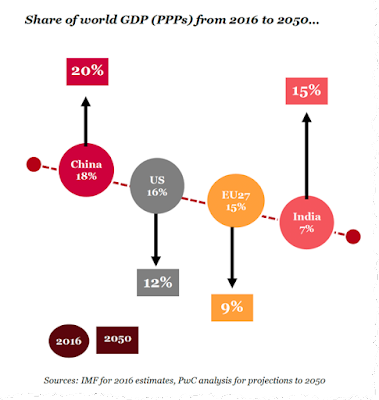 The following is a summary of key findings:

1. The world economy could more than double in size by 2050, assuming broadly growth-friendly policies and no major global civilization-threatening catastrophes.
2. Emerging markets will continue to be the growth engine of the global economy. By 2050, the E7 economies could have increased their share of world GDP from around 35% to almost 50%. China could be the largest economy in the world, accounting for around 20% of world GDP in 2050, with India in second place and Indonesia in fourth place (based on GDP at PPPs).
3. A number of other emerging markets will also take center stage – Mexico could be larger than the UK and Germany by 2050 in PPP terms and six of the seven largest economies in the world could be emerging markets by that time.
4. The EU27 share of world GDP could be down to less than 10% by 2050, smaller than India. 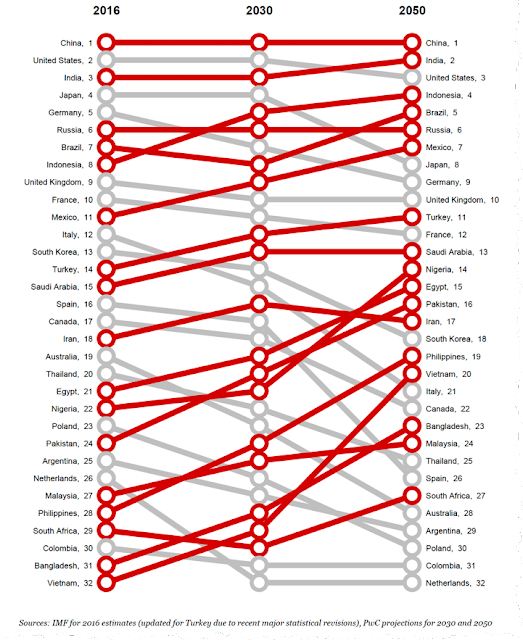 5. Vietnam, India and Bangladesh to be three of the world’s fastest growing economies over this period. UK growth has the potential to outpace the average rate in the EU27 after the transitional impact of Brexit has passed. The fastest growing large EU economy to be Poland.
6. Today’s advanced economies will continue to have higher average incomes, but emerging economies should make good progress towards closing this gap by 2050.
7. To realize this growth potential, emerging market governments need to implement structural reforms to improve macroeconomic stability, diversify their economies away from undue reliance on natural resources and develop more effective political and legal institutions. 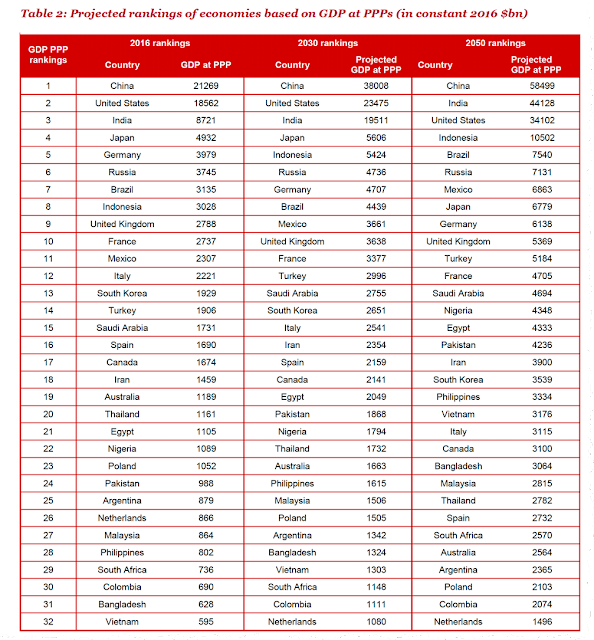 How will the global economic order change by 2050? 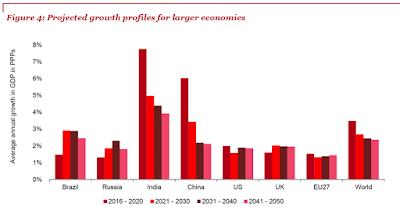 Growth in the E7 will continue to outpace that of the G7 with annual average growth of around 3.5% between 2016 and 2050, while the G7’s growth will be slower at around 1.6% per annum. G7 is a group of advanced economies of Canada, France, Germany, Italy, Japan, the United Kingdom and the United States. E7 is a group of emerging market economies of Brazil, China, India, Indonesia, Mexico, Russia and Turkey.

China’s rises to around 20% and India’s to 15%. The US’s share of world GDP will also fall, potentially to around 12% by 2050. By 2050, India could overtake the US to be the world’s second largest economy in GDP at PPP terms, and Indonesia could be the world’s fourth largest economy. Six of the seven largest economies could be today’s emerging markets by 2050. Vietnam, India and Bangladesh could achieve annual average growth of around 5% over the next 34 years. Nigeria could achieve growth of around 4% per annum if it can diversify and reform its economy.


EU will steadily lose ground relative to the Asian giants. By 2050, emerging economies such as Mexico and Indonesia are likely to be larger than the UK and France, while Pakistan and Egypt could overtake Italy and Canada. In terms of growth, Vietnam, India and Bangladesh could be the fastest growing economies over the period to 2050, averaging growth of around 5% a year. The following chart shows the projected average annual GDP growth rate over the next 34 years for all of the 32 countries. Total GDP growth is also broken down into how much is attributable to population growth and how much to real GDP per capita growth. 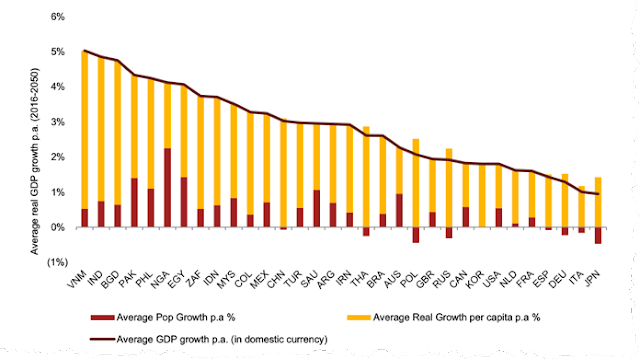 Nigeria has the potential to be the fastest growing large African economy and could move up the GDP rankings from 22nd place to 14th by 2050. But Nigeria will only realize this potential if it can diversify its economy away from oil and strengthen its institutions and infrastructure. Colombia and Poland also exhibit great potential, and are projected to be the fastest growing large economies in their respective regions, Latin America and the EU.

Growth in many emerging economies will be supported by relatively fast-growing populations, boosting domestic demand and the size of the workforce. This will, however, need to be complemented with investment in education and an improvement in macroeconomic fundamentals to ensure there are sufficient jobs for growing numbers of young people in these countries. 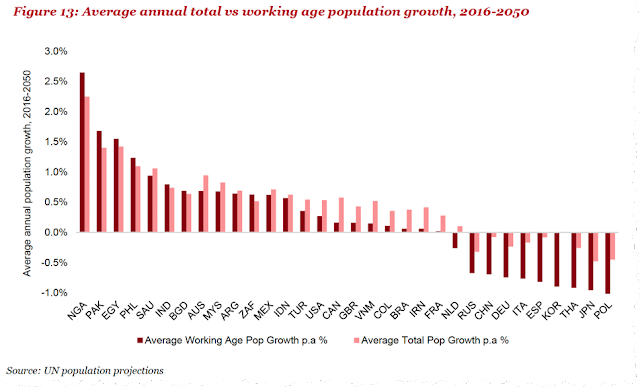 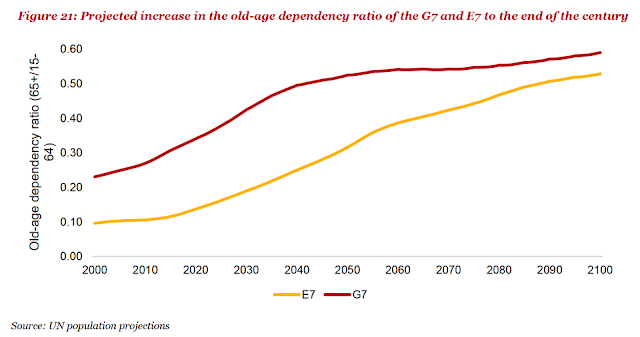 There will be also a rise in income inequality:

Nevertheless, the GDP/capita will remain the highest for the USA and continue at half of the USA amount in China because of the continued differences in the size of the population:

The
The global projection of global PPP achievement can be therefore seen best in the following chart:

The largest rise PPP income will take place in China and maybe India.