Global value chains as we know them today could not exist without technology. The previous wave of digital technologies—from instant communications to supply chain management software—reduced barriers of distance and complexity, enabling companies to interact with suppliers and customers anywhere around the world. By reducing transaction costs, digital technologies enable trade in goods and services to soar.

This Blog was extracted from:
https://www.mckinsey.com/featured-insights/innovation-and-growth/globalization-in-transition-the-future-of-trade-and-value-chains

Although trade tensions dominate the headlines, deeper changes in the nature of globalization have one largely unnoticed. We analyze 23 industry value chains spanning 43 countries to understand how trade, production, and participation changed from 1995 to 2017. Grouping these value chains into six archetypes based on their trade intensity, input intensity, and country participation reveals diverging pathways. We see that globalization reached a turning point in the mid-2000s, although the changes
were obscured by the Great Recession. Among our key findings 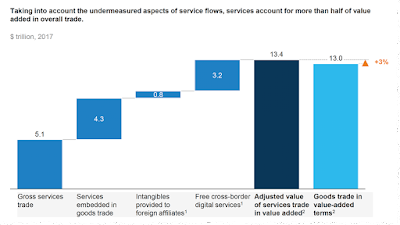 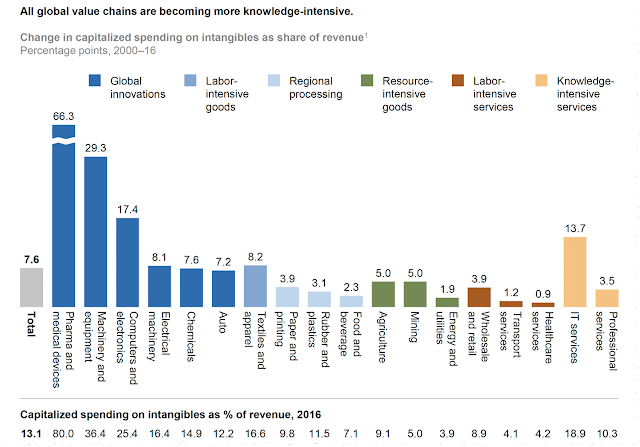 ƒThree forces explain these changes in value chains. First, emerging markets’ share of global consumption has risen by roughly 50 percent over the past decade. China and other developing countries are consuming more of what they produce and exporting a smaller share. Second, emerging economies are building more comprehensive domestic supply chains, reducing their reliance on imported intermediate  inputs. Lower global trade intensity is a sign that these  countries are reaching the next stage of economic development. Finally, global value chains are being reshaped by cross-border data flows and new technologies, including digital platforms, the Internet of Things, and automation and AI. In some scenarios,  these technologies could further dampen goods trade  while boosting trade in services over the next decade. 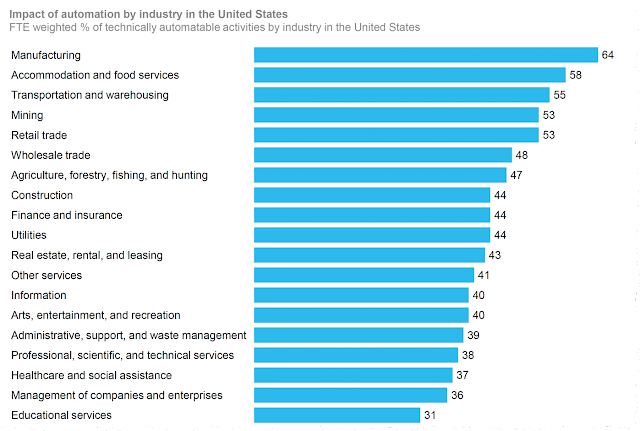 Companies face more complex unknowns than ever before, making flexibility and resilience critical. With  the costs and the risks of global operations shifting,  companies need to decide where to compete along  the value chain, consider new service offerings,  and reassess their geographic footprint. Speed to mark e next-generation technologies on trade flows is unclear, but in some scenarios, they could dampen goods trade and further boost flows of services and data. As they diffuse through global value chains, they will create openings for new players and opportunities for incumbents to shift their business models. Different regions of the world may also be able to develop new competitive advantages.

The history of globalization can be seen as waves of “unbundling.”  The first wave came after the Industrial Revolution, when the introduction of steamships and railroads reduced the cost of moving goods. This changed the economics of buying things made halfway around the world. This trend continued through the 20th century. From 1930 to 2000, the price of shipping fell by approximately two-thirds. Production could now occur far from the final consumer.

The second great unbundling was the more recent ICT revolution, which made it possible for companies to disaggregate linear production processes—that is, breaking them into discrete steps and outsourcing some of those steps to external suppliers. Global value chains existed before the internet, but the internet helped to fuel further fragmentation and realignment. Many more countries began participating in all types of value chains, and networks of specialized suppliers and assembly plants sprang up worldwide.

During this state there will be widespread reduction in manufacturing employment in all advanced economies: 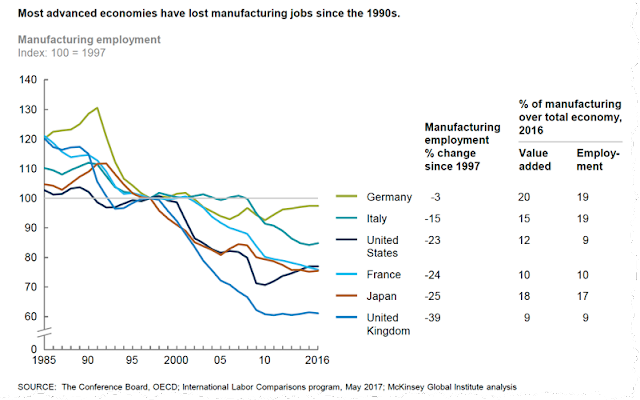 The reductions in manufacturing employment cannot be reversed, with the exception Germany that has meanwhile become an export leader in automobiles. There is no way how Italy, US, France, Japan and the UK can create the manufacturing and human capital that would reconstitute industrialization.

The Information and Communications Technology (ICT) revolution also paved the way for the explosive growth of cross-border data flows noted in progress of digital globalization. According to World Bank data, 46% of the world is online, up from 20%a decade ago. The number of cellular subscriptions worldwide now exceeds the planet’s population. From 2005 to 2017, the amount of cross-border bandwidth in use grew 148 times larger.  Some of the traffic being carried reflects companies interacting with their foreign operations, suppliers, and customers.

While ICT and the internet accelerated trade by reducing transaction costs, the next wave of technologies will have a more varied and complex effect:

1. Reducing transaction costs.  Some new technologies will smooth transportation   logistics, financing, and search and coordination—all of which enables increased trade in goods, services, commodities, and digital flows.
2. Altering production processes. Advanced robotics, AI, and analytics are the building blocks of a more automated and efficient form of digitized manufacturing—and because they substitute for labor, they may reduce the importance of wage differentials in location decisions. Additive manufacturing makes it possible to produce goods even closer to the end consumer; it also supports speed and customization.
3. Creating and transforming products.  From renewable energy and electric vehicles to music streaming, technology is transforming some existing products and services as well as creating entirely new ones.

E-commerce has already enabled significant cross-border flows by aggregating huge selections and making pricing and comparisons more transparent. It has also reduced the impact of distance on trade flows. Research projects that cross-border B2C e-commerce alone will grow to approximately $1 trillion by 2020. Cross-border B2B e-commerce is likely to be several times larger.
Logistics technologies also continue to improve. The Internet of Things (IoT) can make delivery services more efficient by tracking shipments in real time, and AI can route trucks based on current road conditions. Automated document processing can speed goods through customs. At ports, autonomous vehicles can unload, stack, and reload containers faster and with fewer errors. Blockchain shipping solutions can reduce transit times and speed payments. We calculate that new logistics technologies could reduce shipping and customs processing times by 16 to 28%. By removing some of the frictions that slow the movement of goods today, these technologies together could potentially boost overall trade by 6 to 11% by 2030.

Roughly half of the tasks that workers are paid to do could technically be automated, suggesting a profound shift in the importance of capital versus labor across industries. The growing adoption of automation and robotics in manufacturing makes proximity to consumer markets, access to resources, workforce skills, and infrastructure quality assume more importance as companies decide where to produce goods. Companies are reconsidering location decisions as a result. Service processes can also be automated by artificial intelligence (AI) agents. 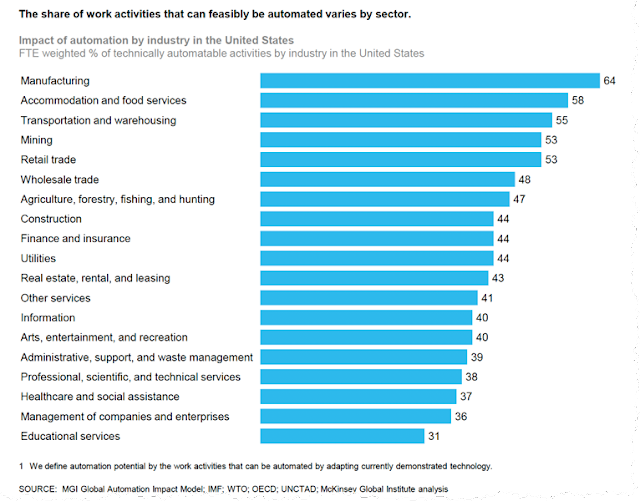 The addition of machine learning to these virtual assistants means they can perform a growing range of tasks. Companies in advanced economies are already automating some customer support services rather than offshoring them. This could reduce the $160 billion global market for business process outsourcing (BPO), now one of the most heavily traded service sectors. Additive manufacturing (3-D printing) could also influence future trade flows. Most experts believe it will not replace mass production over the next decade; its cost, speed, and quality are still limitations. But it is gaining traction for prototypes, replacement parts, toys, shoes, and medical devices. While 3-D printing could reduce trade in some specific products substantially, the drop is unlikely to amount to more than a few percentage points across overall trade in manufactured goods by 2030.

Overall, we estimate that automation, Artificial Intelligence (AI), and additive manufacturing could reduce global goods trade by up to 10 percent by 2030. However, this reflects only the direct impact of these technologies on enabling production closer to end consumers in advanced economies. It is also possible that these technologies could lead to near-shoring and regionalization of trade instead of re-shoring in advanced economies.

In the traditional view, global flows of services in gross terms are much smaller than flows of goods. But as detailed above, the true value of services in trade is obscured in three areas: the value added they contribute to the production of goods, cross-border flows of intangibles, and global access to free digital services. 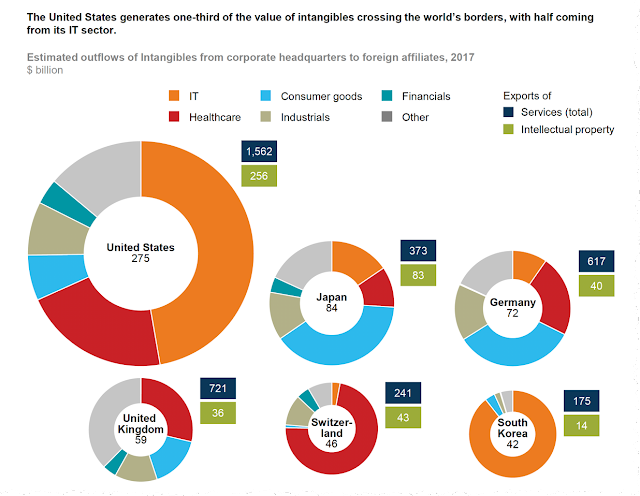 There are three channels that collectively produce up to $8.3 trillion in value annually—a figure that would increase overall trade flows by $4.0 trillion and reallocate another $4.3 trillion currently counted as part of the flow of goods. If we add our estimates of these three channels to directly observed service flows, the total   value of services trade in value-added terms would be an estimated $13.4 trillion, a figure that would exceed the $13.0 trillion value added of goods trade. 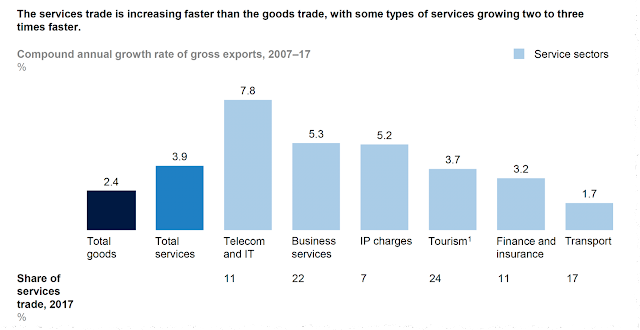 Over the past quarter century, more than a billion people worldwide have exited poverty. As their incomes rise, many of them are passing the point at which they can begin to make significant discretionary purchases and join the consuming class. Not only have millions of households gained spending power for the first time, but millions more are moving up into higher income segments, passing the point at which consumption accelerates sharply. The global middle class had expanded to 3.2 billion people as of 2016 and posits that we have almost reached a tipping point at which middle-class. This trend is evidenced in the rise in the cross-border data flow: 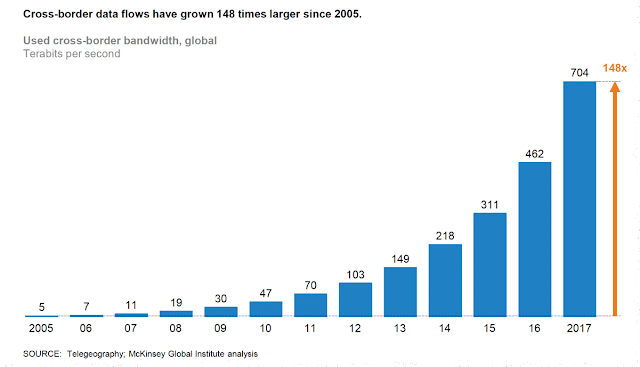 In the years ahead, emerging economies are projected to be the world’s fastest-growing pockets of demand. By 2030, overall global consumption is forecast to reach $106 trillion, twice its 2017 level, with 60 percent of this increase coming from the developing world. McKinsey estimates that emerging markets will likely consume almost two thirds of the world’s manufactured goods by 2025, with products such as cars, building products, and machinery leading the way. The map of global demand, once heavily tilted toward advanced economies, is being completely redrawn—and global value chains are reconfiguring accordingly. While China is the largest part of this story, other developing countries also play a role. 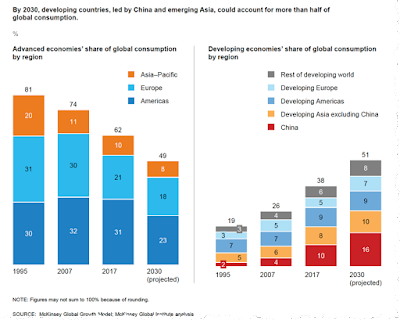 For instance, the adoption of EVs (Electric Vehicles) could disrupt automotive value chains and trade. Battery-powered EVs have only 20 to 30 moving parts in their drivetrains, compared to 130 to 170 moving parts in an internal combustion engine. We estimate that EVs could reduce trade in auto parts (which totals some $700 billion today) by up to 10 percent while also reducing demand for crude oil and petroleum. 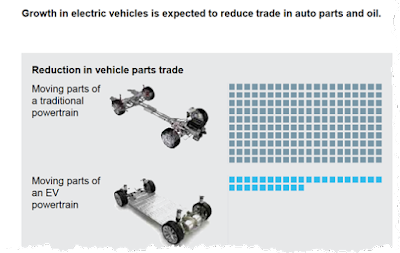 The world is also shifting toward greater use of renewable energy, driven by a combination of technology improvements and regulatory mandates. Perspective projects that the world’s electricity generation mix will have a very different look by 2030, with the share of electricity generated from solar and wind energy increasing by 4 times and 2.5 times, respectively. These sources could account for almost 20 percent of electricity generation in 2030, up from just 6 percent today. 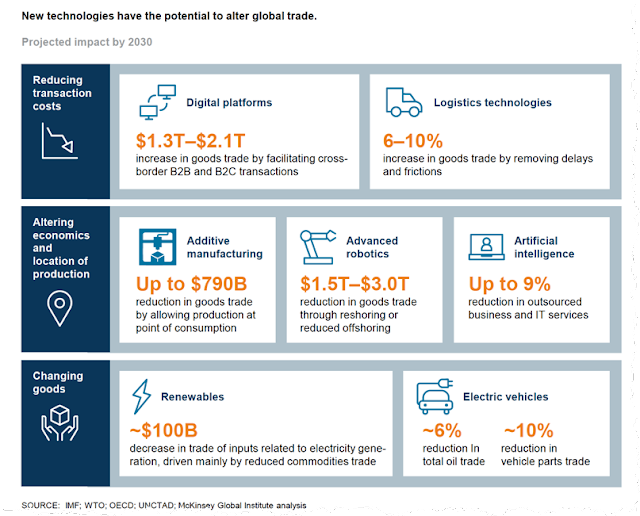 Estimated savings in world trade from innovative technologies will influence the future economics. The largest savings will come from digital platforms that became the basis for transaction savings. Digital transactions will simplify logistics. But the greatest savings will accrue from labor saving robots and computerized manufacture of parts (“additive manufacturing”). When electric vehicles are introduced they will not only reduce the costs of automobiles but also industries that support them, such as gasoline in and parts. The projected cost reductions in global trade could deliver over ten trillion of savings within the next decade.