#151 Changes in the Structure of Global Trade

1. Goods-producing value chains have grown less trade-intensive
Trade rose rapidly from 1995 to 2007. More recently, the value in goods producing value chains has fallen. Trade is still growing in absolute terms, but the share of output has fallen from 28.1% in 2007 to 22.5% in 2017. The decline in trade intensity is especially pronounced in the most complex and highly traded sectors. It reflects the development of China which is now consuming more of what it produces.

2. Services play a growing and undervalued role in global value chains
In 2017, gross trade in services totaled $5.1 trillion. But trade in services has grown more than 60% faster than goods trade. Some sub-sectors, including telecom and IT services, business services, and intellectual property charges, are growing two to three times faster.

The full role of services is obscured in the reported trade statistics. Services create roughly one-third of the value that goes into traded manufactured goods. R+D, engineering, sales and marketing, finance, and human resources all enable goods to go to market. In the future, the distinction between goods and services will continue to blur as manufacturers increasingly introduce new types of leasing, subscription, and other business models.

Other than low wages factor into company decisions about where to base production. These include access to skilled labor or natural resources, proximity to consumers, and the quality of infrastructure.
In the future, automation and AI may amplify this trend, transforming labor intensive manufacturing into capital-intensive manufacturing. This shift will have important implications for how low-income countries participate in global value chains.

4. Global value chains are growing more knowledge-intensive
Intangibles are playing a bigger role in global value chains. In all value chains, capitalized spending on R+D and intangible assets such as brands, software, and intellectual property is growing as a share of revenue. This rose from 5.4% of revenue in 2000 to 13.1% in 2016. This trend is most apparent in global innovations value chains. Companies in machinery and equipment spend 36% of revenue on R+D and intangibles, while those in pharmaceuticals and medical devices average 80%. The growing emphasis on knowledge and intangibles favors countries with highly skilled labor forces, strong innovation and R+D capabilities, and robust intellectual property protections.

In many value chains, value creation is shifting to upstream activities, such as R+D and design, and to downstream activities, such as distribution, marketing, and after-sales services. The share of value generated by the actual production of goods is declining because offshoring has lowered the price of many goods. This trend is pronounced in pharmaceuticals and consumer electronics, which have seen the rise of “virtual manufacturing” companies that focus on developing goods and outsource their production to contract manufacturers. 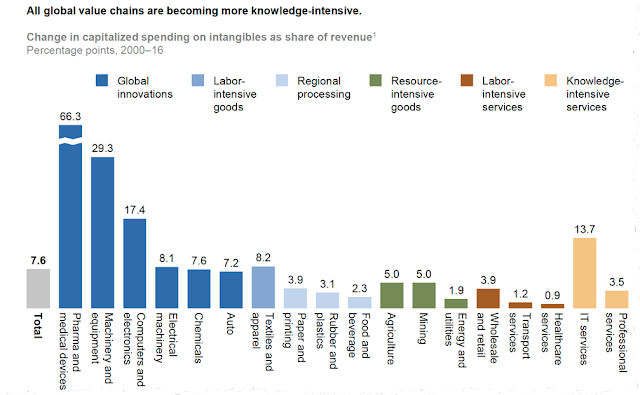 Until recently, long-haul trade crisscrossing oceans was becoming more prevalent as transportation and communication costs fell and as global value chains expanded into China and other developing countries. The share of trade in goods between countries within the same region declined from 51% in 2000 to 45% in 2012.

That trend has begun to reverse in recent years. The intraregional share of global good trade has increased by 2.7 percentage points since 2013, partially reflecting the rise of emerging-market consumer consumption. This development is most noticeable for China. Regionalization is most apparent in global innovations value chains, given their need to closely integrate many suppliers for just-in-time sequencing. This trend could accelerate in other value chains as well, as automation reduces the importance of labor costs and increases the importance of speed to market in company decisions about where to produce goods.

The structure of global trade is changing. The share of trade from low cost countries is declining as higher value chains are developing their own consumer-based consumption of goods and services. The share of global trade is also shifting from goods to services to knowledge-based products. With the rise of middle-class consumers in developing countries many of the present international value chains are shifting from global to regional markets.