The growth of earnings since 1980 has quadrupled. There were 25 recessions prior to 1980 that have held back the growth of earnings for 40 years. However earnings subsequent to Reagan's presidency exploded (with the exception of the 2008 recession) from $0.20 per share to current levels of $1.25. A new era arrived.  It conveyed a steadily increased wealth for shareholders except for a suggestion of greater volatility. Shareholders who held their wealth since 2008 have now shown more than fivefold gains in wealth. Such gains would be concentrated within the top quintile of the US households, giving rise to an increase in income and wealth inequality.

The question before us at this time concerns whether in the future the gains in earning will continue to grow as before, whether the number of S+P shares will increase and whether the price/earnings ratio per share will continue to gain.  To evaluate such projections we need to consider that the earnings per share depend on three variables. Each of these is dependent on effects that are independent of cash earnings for the S+P companies. First, US companies can reduce the number of shares, thus increasing the earnings per share. Second, cash earnings can diminish as business profitability declines. Third, the earnings value of each share is greatly influenced by the the multiple of the valuation that is attributed to cash earnings. When shareholder costs (as measured by the cost of debt) are low the valuation multiple will be high. At present the shareholder implied costs of capital are at a historical low level whereas the multiplier of the value of shares is at an all time high.

What are then the indicators that will suggest the future of the worth of the shareholder's wealth as indicated by the worth of its S+P shares?

The total stock market capitalization, as defined by the stock market worth of Wilshire 5000 shares, is now 1.5 times greater than the total earning capacity of the US, as measured by the current value of the US GNP. This ratio has risen three-fold since 1980 and has shown an increased volatility over the last two recessions. This ratio is now at an all time high: 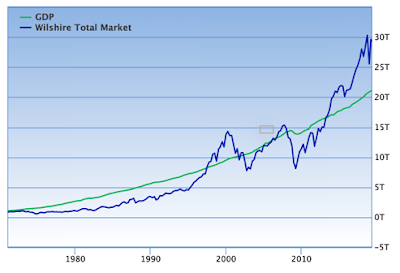 The Total Market Cap to GDP ratio, according to Warren Buffett is as follows:

A predictor of the next recession is the Market Cap to GDP ratio of less than 100%. Accordingly, the current estimate of a potential recessionary decline is -56% (85% minus 141%).

According to Buffet the current $30 Trillion stock market is worth only $22 Trillion, which is a discount of 27%. During a recession the decline in the market could exceed its stated valuation by at least 50%. That suggests that the current Market Cap downside could be as high as $15 trillion. What could deliver such a large shock is not clear but it come from a recognition that the current premier position of the US dollar could be threatened.

There is no question that the underlying earning capacity of the US, as measured by the GNP, is currently overstated and is vulnerable to precipitous declines when the next recession strikes. If the US is restored to its 1980 equivalent GNP levels, the multiple used to calculate S+P earnings would be reduced from 125 to 25.  That would be a five fold reduction which would suggest that a share of S+P would decline by as much as 80%. One could also ask whether there is an upside of the ratio of Wilshire over GNP.  Could it rise from the current 1.5 to a much greater in the next 20 years? That is highly unlikely as the projected GNP growth would have to rise than the current rate of 2%/year. The total market capitalization of Wilshire 5000 would also have to rise well over 200%. These are highly unlikely prospects.

One of the reasons for projecting future declines in the US GNP can be found in a persistent decline of international trade of the US share of global trade: 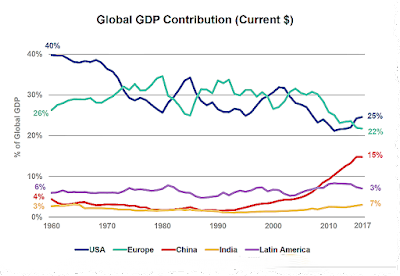 US share of global trade has declined from 40% in 1960 to the current 25%. Such loss has been the consequence of a steady rise of China's share from 3% to the current 15% (in 2017). At such rates the US will decline to less than 20% of global trade while China will rise above 30%.  China can be expected to dominate international trading by 2030 or perhaps sooner.

This graph shows a decline in annualized returns in more realistic terms of a total market valuation of 40%. The projected returns then decline from 17% in 1980 to the present -9.9% which suggests that the market is grossly overvalued if examined from a historical perspective.

Total Market Index is at $ 30,344 billion, which is about 144.1% of the last reported GDP. The US stock market is positioned for an average annualized return of -2.1%, estimated from the historical valuations of the stock market. This includes the returns from the dividends, currently yielding at 1.76%:

Since 1970 there has been a steady decline in expected returns on the stock market as the prices of shares exceeded their intrinsic value. Current average returns are negative, which means that a shareholder purchasing new shares for a balanced fund, such as the S+P 500, would be actually losing money. Consequently all the purchases of stock from dividends that are realized in retirement funds would diminish a retiree's assets.

Analyzing the Price/Earning (P/E) ratio is another way for viewing the soundness of invested funds. Prof. Robert Shiller of Yale University invented the Schiller P/E to measure the market's valuation. The Schiller P/E is a more reasonable market valuation indicator as compared with simple P/E ratios because it eliminates fluctuation of the ratio that is caused by the variation in profit margins during business cycles. This approach is similar to market valuations that are based on the ratio of total market cap divided by GDP, where the variation of profit margins do not matter: 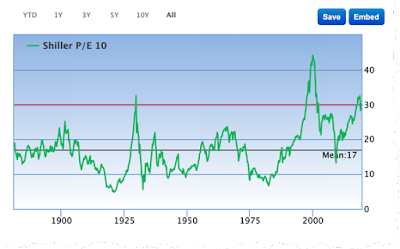 The current Shiller P/E stands at about 30 which compares to levels that were found during the 1929 depression. This ratio has been recently highly unstable rising from below its historical mean of 15 in the 2008 recession. Such fluctuations in the P/E ratio confirm the inherent instability of the current markets.

Another way of assessing the current conditions of the US stock market is by comparison of market returns from leading countries: 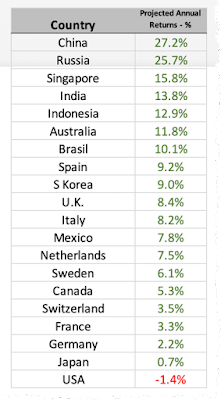 The USA shows the lowest ranking investment returns among global markets. Such low returns are the results of excessive US stock valuations as well as profit returns that, on the average, are below the average global cost of capital. Other countries such as China, Russia and Singapore have also high market valuations but these are not comparable to the prices on the New York stock exchange.

There is no question that prices of shares on the US stock market are excessive as well volatile. All of the trusted indicators show that.  The current stock market is extremely vulnerable to a recession that  may see as much as 50% declines in the valuation of the S+P shares. However, the prices of some of the shares will continue to rise even during a recession. Individual investors may be able to overcome, or preserve their assets waiting for the next recovery. Whether that is feasible warrants a consideration of the global standing the US stock market as compared with other large national holdings. The huge accumulation of cash that is represented in the current valuations is most likely to be sustainable in the near future.

What will be the effects of the next recession on the prevailing dominance of the US stock market is not clear. In the long run (10+) years there are strong chances are that a conglomeration of markets that include all emerging economies will displace the current overwhelming domination of Wall Street in market trading.