China's emergence as a global superpower involves a range of different trends in its economy and military forces. These trends are still in a state of uncertain transition. China now possesses the power in technology, commerce and the military to compete with the U.S.  Yet China, as a developing economy, still faces security threats as well as internal impediments to its projected growth.

As the world economic and strategic center is shifting ever to the Asia-Pacific region. Therefore,  the US must “rebalance” its economic and military positions. The following observations were derived from the December 2018 Net Assessment which was prepared by the Washington Center for Strategic and International Studies.

#1. The should concentrate on restoring its top position in global trade. Unfortunately, the US former comprehensive trading partnerships are deteriorating as aggressive Chinese actions are taking over: 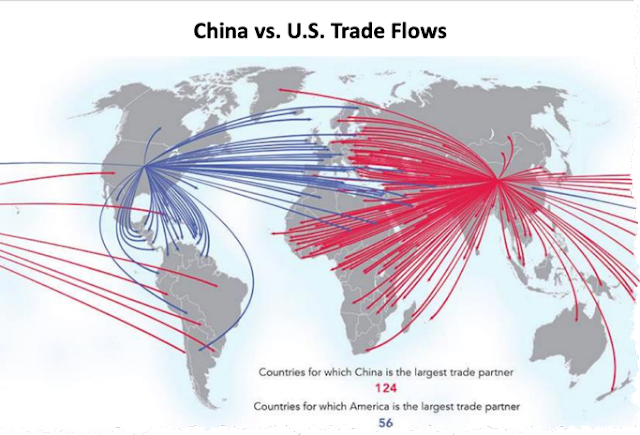 Global trading connections will ultimately dictate political and economic relationships in the future. The Chinese current international 124 trading relationships are already dictating how the future may evolve with US keeping up 56 connections.

#2: The US should restore is the relative dominance in global GDP, which is measured in comparable PPP currency terms: 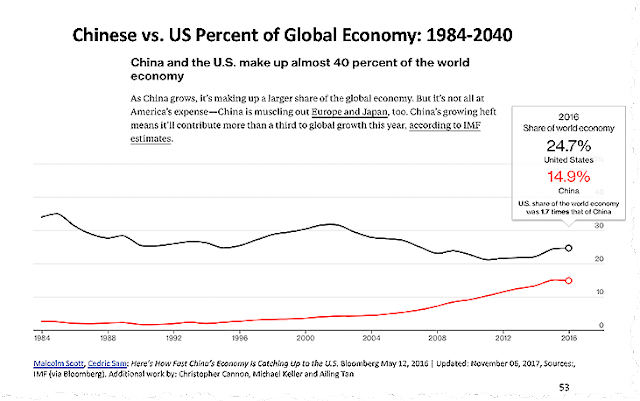 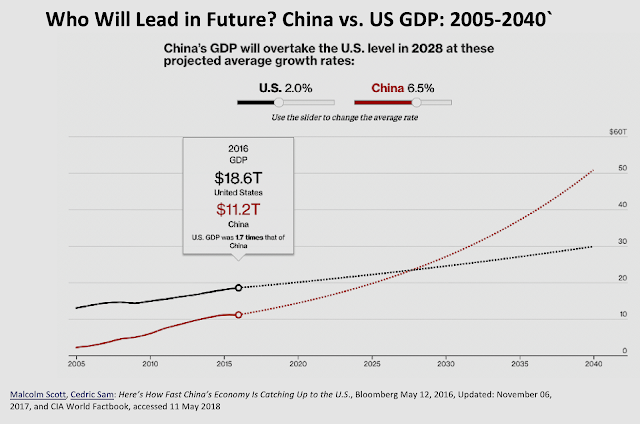 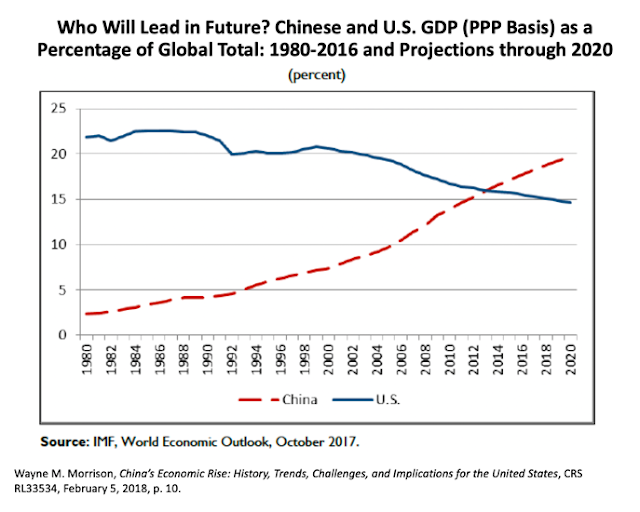 At current growth projections China will overtake the US in 2028 in terms of current GDP dollars. After break-even, the differences between China and the US will continue to grow at an accelerated rate. Such differences will be also reflected in respective shares in global GDPs.

The US share of global total GNP will shrink from 23% in 1990 to less than 15% by 2020. Meanwhile China gains from 4% to 18% during the same period. The share if the remaining global total - consisting largely of emerging countries - decreases from 78% to 67%.

As the dominant share of the US declines by 7%, China gains a 18% share of the global GNP. China's growth in the last 30 years has therefore come from a diminished position of every other emerging country. Will China continue in gaining global market share or will emerging countries improve their position by reducing the importance of countries such as the US, India and the European Union? That is hard to predict, but judging from a increased number of Asian and African leaders that currently support China the global rankings by GDP will shift from a domination by the US to a leadership from China.

As the new GNPs shift from the US it will support China's position as the new superpower. Whether all of other emerging countries, such as India, Indonesia and Brazil will accept the displacement of the current US-backed positions remains to be seen. It suffices to say that China's growth in the relative global ranking in the world is now replacing everybody else.

When the leaders of 86 countries recently met to show their support of the Chinese global expansion it should be noted that the global 5 billion people that are poor are backing the most recent 1 billion China that now have a relatively acceptable income. Hitherto the world was dominated by the 350 million of rich US people. In the future the globe may have to start abiding by new China rules how to manage developing economies.

Wether the China rules will improve the world  cannot be predicted. When checking the scenarios of developing countries and particularly of India one should ask whether rising global importance will be extracted from the US share of the global GNP or the China share.  There is also a possibility that the relative standing of the US and China will remain set at current levels. Any growth of a newly emerging "middle" economies would have to come from a consolidation of GDP's from small countries. The most likely prospect of that happening is unlikely. The potential leader, India, cannot support global economic leadership in the immediate future because of their lacking demographics. 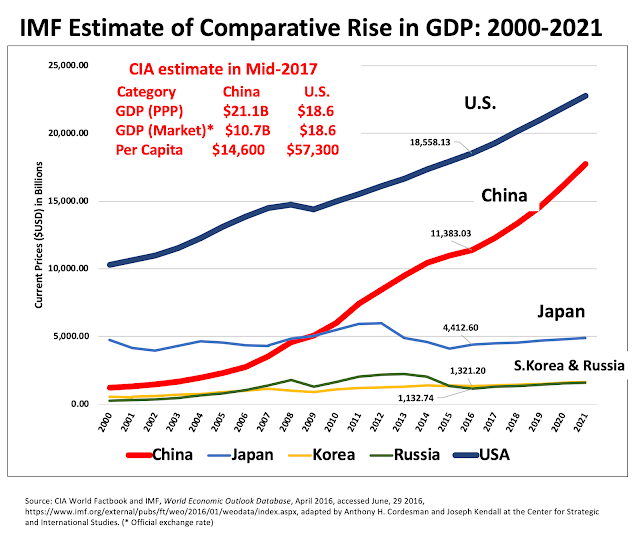 Using GDP parity valuations China (GDP PPP) has already exceeded the US though it still lags by $8 trillion when measured in current market dollars. Since 2000 China has shown unprecedented GDP growth rates as compared with Japan, S. Korea and Russia and has exceeded all other countries. Unless the current trend changes there is no reason to assume why China would not become the top ranking global GDP country in the next half century regardless how that is measured.

When analyzed from a global point of view the GDP ranking matters only a few countries have so far contributed to the global GDP.  Until now the US was dominant but China is now catching up in PPP terms and will exceed the US by 2030 in IMF dollar terms. Will the current US top ranking be replaced by a collection of GDP's from emerging countries, or will the future gains accrue to China as it displaces the US? The probable outcome is not clear but the likelihood of a drastic US decline appears to be the projected outcome from current projections.