#146 The Distribution of Global Wealth

In 2018 there were 176 countries with 4,920,175,000 adults out of a total global population of 7,597,175,530.  35% of that number was under 18 years old. Adults are concentrated in the richest countries whereas children constitute a large share of the population in the poor lands. In the next postings we will discuss only the adequacy of adult earners.

For the purpose of economic analysis we concentrate on the adult count, starting with the ranking of top countries based on their population: 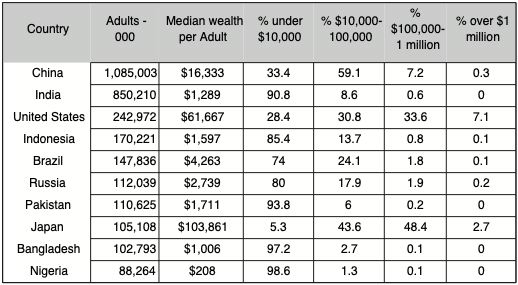 The only exception is China, with 33.4% of the population earning $10,000 and rising. In all other cases, whether for the wealthy or the poor, the levels median wealth per adult did not rise much.

The ranking of the population by means of wealth per adult shows a wide range: 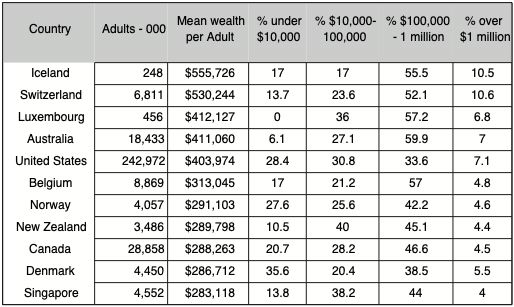 Iceland and Switzerland with a total population of 9 million show a clear indication of wealth. The % of the population with wealth over $100,000 is over 66% whereas the % of the poor population is very small.

Standing out is the United States, Norway and Denmark with their respective % of the poor is over 28% even thought the % of the super-rich is high.

Nevertheless the top ranking wealthy nations represent only 7% of the global population of adults.

So where are the poor? We have ranked the the most impoverished countries defined as keeping 99% of its population in the lowest wealth class: 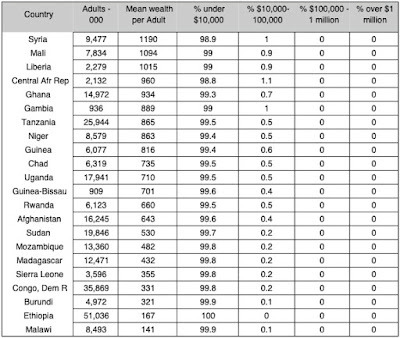 Of the largest populations in the world only the USA and Japan are wealthy. Recently China was gaining, but they need more time to catch up to classify itself as wealthy. China's poverty level ratios are comparable with the USA. Its current prosperity is concentrated on a middle class but is lacking a share in the number of millionaires.

The world's second largest population - India - is now desperately poor and is likely to remain in that position in the foreseeable future. None of the other countries, by population size - Indonesia, Brazil, Russia, Pakistan, Bangladesh and Nigeria - can be expected to rise to a position of economic leadership in the immediate future.

From the standpoint of an expanding global economy only the USA and possibly China in the future can be expected to take over the task of leading the world's economy. Japan remains as a candidate, but its demographic limitations will continue to impede its position as a leader.

The top ranking wealthy countries are small in population and do not operate as sufficient economic base to lead the expansion in the global trade. However, their specialization will make them prosper through global trade.

There is a very large number of bottom ranking impoverished countries. By population they account for 2,252,074 adults,  or 46% of the total.

With the current decline in the economic power of the USA and with the uncertain prospects about the rise in China's economic power, the 2019 global outlook has too many risks for making a forecast about an optimistic future of an increasingly prosperous world to come.