Wealth continued to grow at a moderate pace in 2018, partly reflecting continued rises in equity markets but due more to increases in non-financial assets. The United States continued its unbroken spell of wealth gains since the global financial crisis, adding another USD 6 trillion to the stock of global wealth. China and Europe also made significant contributions to the new record level of global wealth, which is equivalent to USD 63,100 per adult.

This blog is based on https://www.credit-suisse.com/about-us/en/reports-research/global-wealth-report.html

The world was wealthier in the past than we believed a year ago. New official statistical data and other reliable sources have led us to revise our estimate of total global wealth in mid-2017 upward by nearly USD 23 trillion, or 8%. China is the main beneficiary of this newly recorded wealth, although Spanish wealth has also been subjected to a major upgrade. The revision mostly relates to non-financial assets owned by the middle class. This reduces our estimate of the share of financial assets in total global wealth by 1% and the shares of the top 1% and top 10% of wealth holders by about three percentage points. The main outcome of the new wealth valuations is confirmation of what many observers already suspected – that China is now clearly established in second place in the world wealth hierarchy. 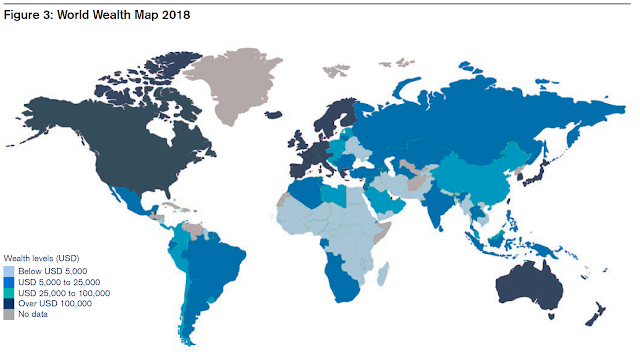 Assigning individuals to their corresponding global wealth positions enables the regional pattern of wealth to be portrayed. China is building middle class wealth, US is concentrating wealth at the top of the pyramid. 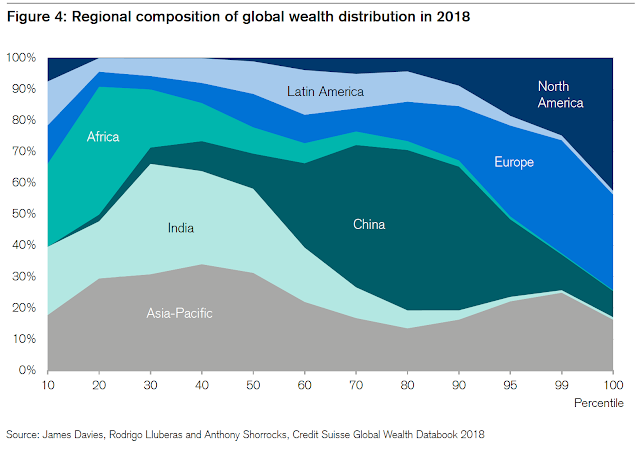 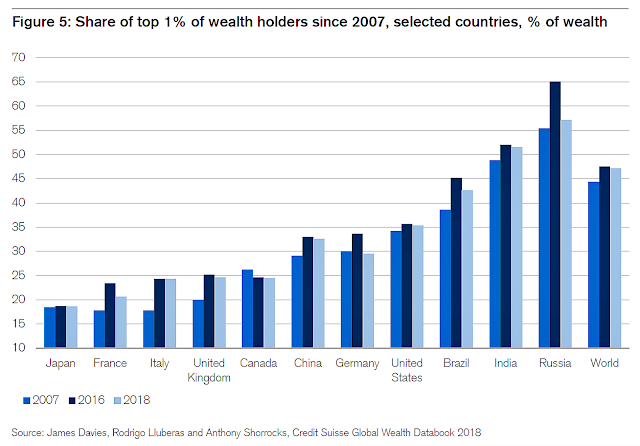 Findings:
The greatest concentration of wealth exists in Brazil, India and Russia for the top 1% holding between 45% to 65%.  Established economies, such as Japan,  France and the UK shares held by the top 1% are between 20% to 25% of total wealth.

The issue is not only in distribution of wealth by how accumulated wealth is applied for growth of the economy in the future. China appears to apply wealth to the middle class whereas Brazil, India and Russia deploy wealth to concentrate wealth to accumulate personal assets.