The World Happiness Report is an annual publication of the United Nations Sustainable Development Solutions Network. It contains articles, and rankings of national happiness based on respondent ratings of their own lives, which the report also correlates with various life factors.

In July 2011, the UN General Assembly adopted resolution 65/309 Happiness: Towards a Holistic Definition of Development inviting member countries to measure the happiness of their people and to use the data to help guide public policy. In 2012 this was followed by the first UN High Level Meeting called Wellbeing and Happiness: Defining a New Economic Paradigm. Bhutan then adopted gross national happiness instead of gross domestic product as their main development indicator.

The distribution of happiness score on a global scale is best illustrated in the  following: 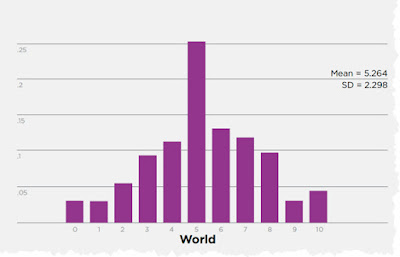 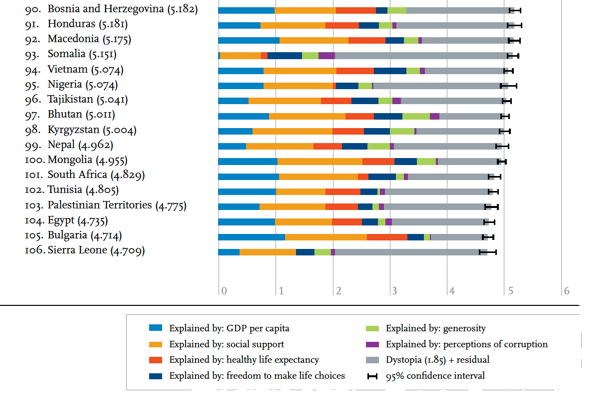 All of the bottom ranked countries, from rank 90 through 106 show happiness index values from 5.2 to 4.7.

With a few exceptions (e.g. the U.S. and China) more than 80% of the global population can be considered not happy. Of course none of that applied to the 0.5% of the global population with income over $1 million. The differences are far reaching. With the rapid dissemination of information about the unhappy conditions of most mankind the question can be asked whether the existing acceptance of poverty and unhappiness will remain for the under-privileged. In the same way as the dangers of global warming have emerged only in the last two decades, we can now anticipate the rising effects of immigration from poor and impoverished countries to the islands of prosperity, e.g. the U.S., Canada, Australia and Europe. 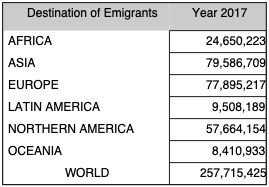 The current  migration of 78 million immigrants to Europe and 58 million to the USA represents a demographic change that is starting to disturb existing political alignments.  The intra-Asian migrations  of 80 million people within Asian countries creates new upheavals for the governance of many nations.

In the next century we can see a breakdown of the international order that was based largely on the dominance from British post-colonial countries. With easy access to communication technologies an weapons it is unlikely that well over five billion poor people   will remain socially and politically indifferent to continue with the status quo.

(1) See: https://worldhappiness.report/ed/2018/ for 2018 Report.
Email ThisBlogThis!Share to TwitterShare to FacebookShare to Pinterest