Trade tensions now dominate the headlines. Meanwhile deeper changes in the nature of globalization have gone largely unnoticed. Globalization has now reached a turning point even though these changes  were obscured by the Great Recession. The purpose of this posting is to summarize what are the seven key developments that are now taking place that describe how the global trade in goods and services are evolving from the current levels that deliver $161 trillion worth of economic value.

2. Cross-border services are growing more than 60 percent faster than trade in goods, and they
generate far more economic value than traditional trade statistics capture. Uncounted
aspects (the value added services contribute to exported goods, the intangibles companies send
to foreign affiliates, and free digital services made available to global users). National statistics attribute 23 percent of all trade to such services, but including these three channels would increase their share to more than 40%

3. Less than 20 percent of goods trade is based on labor-cost arbitrage, and in many value chains, that
share has been declining over the last decade. Meanwhile, a shift in the global value chains are
becoming more knowledge-intensive and reliant on high-skill labor. Across all value chains, investment in intangible assets (such as R&D, brands, and Intellectual Property) has more than doubled as a share of revenue, from 5.5 to 13.1 percent, since 2000.

4. Goods-producing value chains (particularly automotive as well as computers and electronics) are
becoming more regionally concentrated, especially  within Asia and Europe. Companies are increasingly  establishing production in proximity to demand.

5. Goods-producing value chains (particularly  automotive as well as computers and electronics) are
becoming more regionally concentrated, especially  within Asia and Europe. Companies are increasingly establishing production in proximity to demand.

6. China and other developing countries are consuming more of what they produce and exporting a smaller share. Emerging economies are building more comprehensive domestic supply chains,
reducing their reliance on imported intermediate inputs. Lower global trade intensity is a sign that these countries are reaching the next stage of economic development. Global value chains are being
reshaped by cross-border data flows and new  technologies, including digital platforms, the Internet
of Things, and automation and AI. In some scenarios, these technologies could further dampen goods trade while boosting trade in services over the next decade.

7. These trends favor advanced economies, given their strengths in innovation and services as well as their highly skilled workforces. Developing countries with geographic proximity to large consumer markets may benefit as production moves closer to consumers; those with strengths in traded services also stand to gain. But the challenges are getting steeper for countries that missed out on the last wave of globalization. As automation reduces the importance of labor costs, the window  is narrowing for low-income countries to use labor-intensive exports as a development strategy. Regional integration offers one possible solution, and digital technologies also hold possibilities for new development paths.

The consequences of these trends are summarized in the following tabulation: 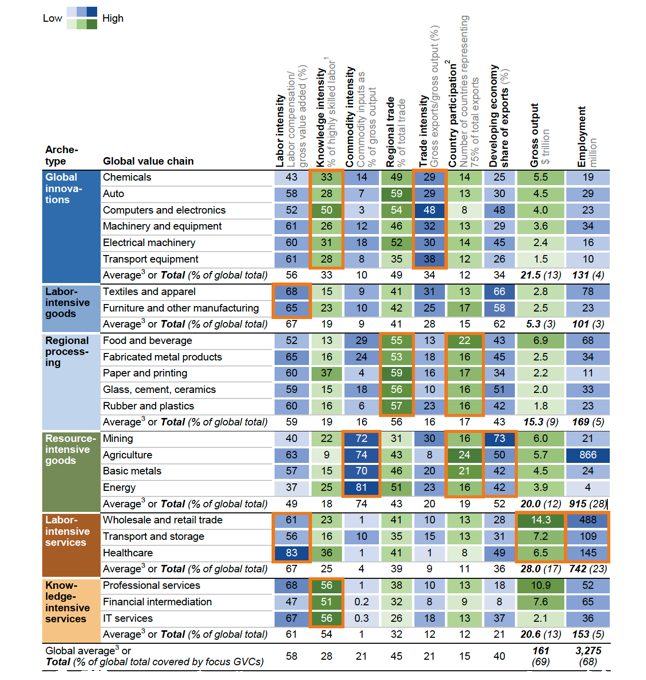 Total global employment in the global economy is presently 3,275 million out of a current  total human population of 7,691 million. With a rising population of people under the age of 20 and over 65, only about half of the remaining global population of 4,416 million can be considered to become someday an active part of the global economy. That will take place when a rise in prosperity of the rest of the currently impoverished world will make that feasible

It will be the purpose of these postings to  concentrate on the roles and missions of "Global Innovators" as well as how it will supports the growth of "Knowledge Intensive Industries". It will be these sectors that will propel a rise from the current global output of $161 trillions to higher future levels through rising in productivity of other sectors.