1. The world economy could double in size by 2050.
2. Emerging markets will continue to be the growth engine of the global economy.
3. Today’s advanced economies will continue to have higher average incomes, but emerging economies should make good progress towards closing this gap by 2050.
4. Emerging market governments need to implement structural reforms to improve macroeconomic stability, diversify economies away from undue reliance on natural resources.

1. There is a considerable long-run economic potential of emerging economies, but this potential will require growth-friendly policies that attract businesses, investment and talent.
2. Revive stagnating global trade growth, engaging in global markets, sharing best practice, and supporting the movement of goods, services.

The global GDP (PPP) rank of the US will decline by 2050 to the #3 position and will be 42% below the top ranking China. The emergence of India into the #2 slot appears to be the most surprising development.

Changes in the global order are propelled by population growth which is then reflected into real growth per capita as well as average GDP growth. Increases in real growth per capita can be found primarily in undeveloped countries such as India which shows a very high GDP growth of 4.9%. That will suggest a very large infusion of innovation and capital as well as massive social transformations.  Whether that is feasible is questionable. 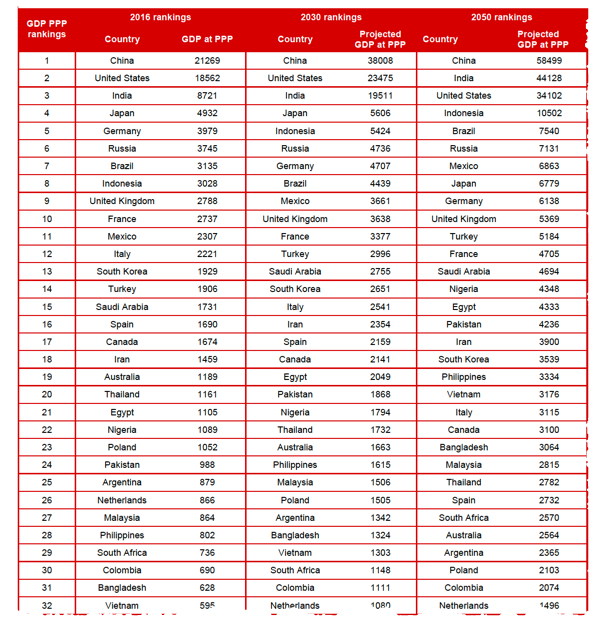 Europe show a decrease in population while continuing small increases in income per capita. As the increased growth of the population in countries with increasing income takes place, the entire global economy continues to shift prosperity from poor countries to barely prosperous economies. 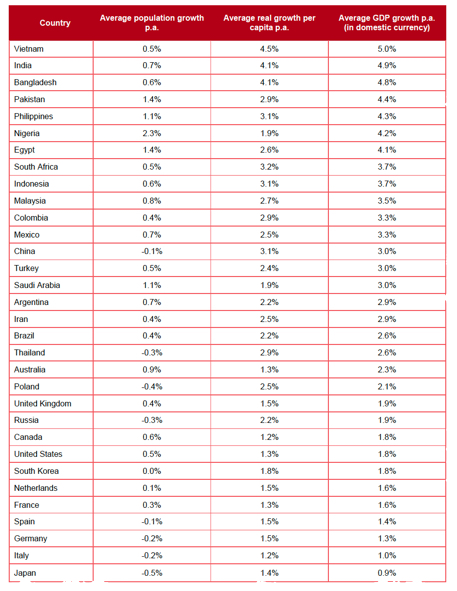 Large increases in GDP growth that is shown for India and China through 2020 will not continue into the future. A restructuring will take place, especially in China, after hundreds of millions of inhabitants have been lifted from poverty through state-mandated urbanization. Whether that will take place in India is a speculation but on a global scale the transitions to a different civilization will be taking place as a global slow-down in growth takes place. Meanwhile, the population in developed countries such as the US, Canada and Australia, will keep up their high levels of prosperity.

The high levels of GDP growth in 2016 to 2020 in India and in China will not be repeated. By 2031 the growth in China will decline to world average levels of about 2% which will still provide for sufficient gains in GDP as the population declines to 0.1% growth. 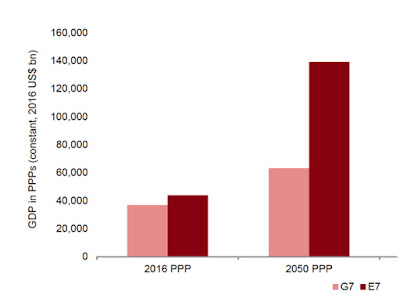 By 2050 the much larger population in E7 countries will surpass G7 countries in terms of their GDP. The resulting realignments in global trade will completely change the value chains from a domination from the US to the distribution of manufacturing and services to a few centers of competency. 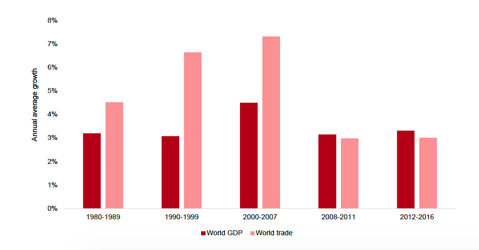 As the global economy shifts the distribution of goods from US dominance, the structure and organization of trade will change to increased dependency on local organizations.