#137 Projected Changes in the Economic Order

It is important to take a longer term view of global economic prospects that looks beyond the short-term ups and downs of the economic and political cycle, which are indeed very difficult to forecast. The firm of PricewaterhouseCoopers, a multinational professional services firm, has just published a report on "The Long View - How will the global economic order change by 2050?" (https://www.pwc.com/gx/en/world-2050/assets/pwc-world-in-2050-summary-report-feb-2017.pdf). The data from the PWC report are used for this posting.

America has progressed through the 19th and early 20th centuries to become the largest economy in the world despite a civil war, various other conflicts with foreign powers, three presidential assassinations and numerous economic and financial crises. Innovation, technology and superb financial management helped the US and related global economic growth to bounce back strongly from two world wars and a Great Depression to reach record current levels in the post-war decades.

The world economy will more than double in size by 2050, far outstripping population growth. Consequentially, the stage has been set for a rearrangement in the global economic order. 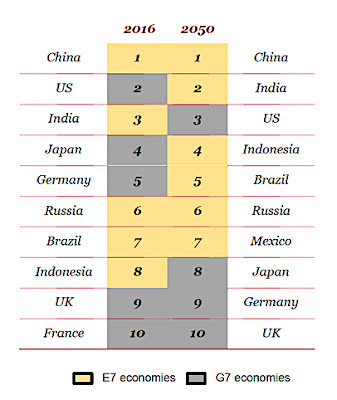 By 2050 China will be the largest economy by a significant margin, while India may edge past the US into second place. Indonesia would rise to fourth place. The EU27’s share of global GDP will have fallen to below 10%.  These shifts can be shown: 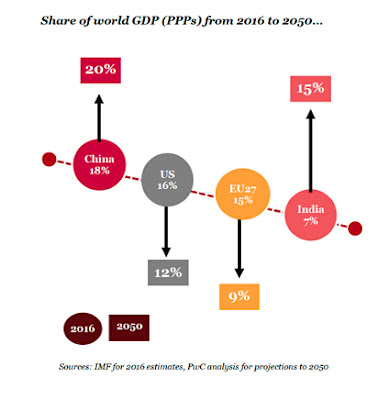 The US share of the world's GDP declines from 16% to 12% and the EU share declines from 15% to 9% while China share rises from 18% to 20%. India share rise from 7% to 15% - the largest gain for any large country which is also most improbable projection. This restructuring will coincide with the rise in the global population from the current 7.7 billion to 9.7 billion in 2050. Shifting from the less prosperous countries that have 35% of the GNP in Asia to a declining 21% in the richer West  countries will call for restructuring in the flows of global trade. As results the ranking of countries will also change: 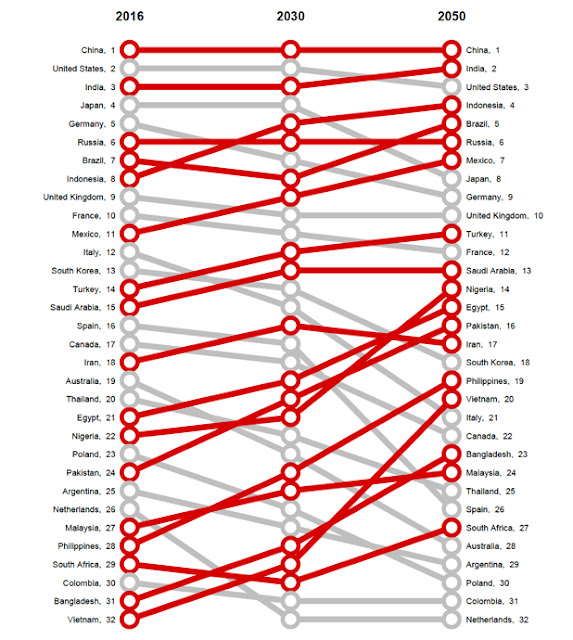 The GDP ranking of countries will improve for Indonesia, Brazil, Mexico, Turkey and Nigeria. Japan, Germany, France and South Korea will lose. As result the scope and directions of international trade will be different from present flows of goods and services.

The projected average annual GDP growth rate over the next years will also show major changes. Total GDP growth was broken down into how much is attributable to population growth and how much to GDP per capita: 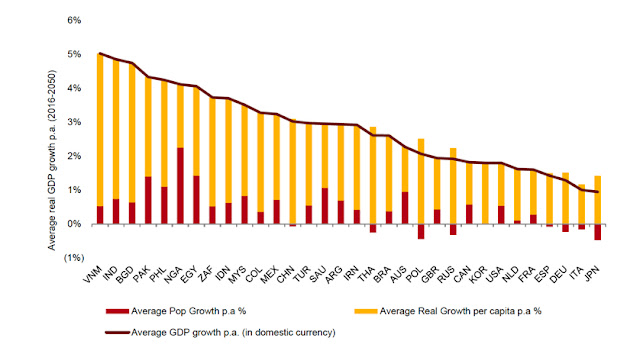 We show a decline in the population of Poland, Russia, Germany, Italia and Japan. These are all countries that were directly affected by WWII combat. Pakistan, Nigeria, Egypt, Saudi Arabia, Australia, Canada and the USA show population gains and tended to allocate a large share of government spending to social welfare. In the case of the last three countries a favorable immigration policy explains favorable population increases.

A rise in the average real per capita income is not reflected for wealthy countries. The average GDP growth per capita remains low fos USA, France, Germany, Spain and Japan. For the poorest countries such as India, Bangladesh, Pakistan and Nigeria, there are high gains while still keeping populations at low levels of real income. Such disparities suggest that international trade must include not only goods and services but also capital  funds that support investments in productivity gains andd infrastructures.

The world of 2050 will have progressed from the current levels, but will still remain largely poor or developing for in countries trying to find ways how to organize for innovation to take place:

Projected Real GDP per Capita for 2050

The world economy of 2050 looks similar to the current environment. Although diminished the USA, Australia and Europe will be keeping up their prosperity. Countries such as China, India, Brazil, Mexico, Iran, Turkey, Argentina and South Africa will be gaining in income but not progressing to levels of prosperity that can be seen in countries that have already high level of economic achievement. Emerging countries will be improving, but not sufficiently to achieve full economic potential.

To realize high levels of prosperity the emerging markets countries need to implement structural reforms that would improve their macroeconomic fundamentals. A full potential that is available countries will have to undertake sustained investments in education. Adverse global conditions have highlighted the importance of diversified economies for long-term sustainable growth. Underlying all of this is the need to develop political, economic, legal and social institution that will generate incentives for innovation.  That is needed to support the future of   a knowledge-based economy on which the next stage of our civilization will be based.

SOURCE OF DATA: https://www.pwc.com/gx/en/world-2050/assets/pwc-the-world-in-2050-full-report-feb-2017.pdf
Email ThisBlogThis!Share to TwitterShare to FacebookShare to Pinterest