#134: What Supports the Current Rise in the U.S. Stock Market? 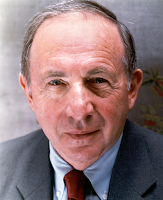 Deregulation and tax cuts are bullish for the US economy as well as for corporate earnings and stock prices. On the other hand, the ballooning federal deficit—attributable to the tax cuts and spending increases—is putting upward pressure on bond yields at the same time that the Fed has moved to raise interest rates and taper its balance sheet.(1)

S+P 500 earnings got a big boost from the tax bill passed at the end of last year. The Tax Cut and Jobs Act (TCJA) lowered the federal statutory corporate tax rate to 21% from 35%. Since its enactment raised earnings expectation have been projected for the next year: 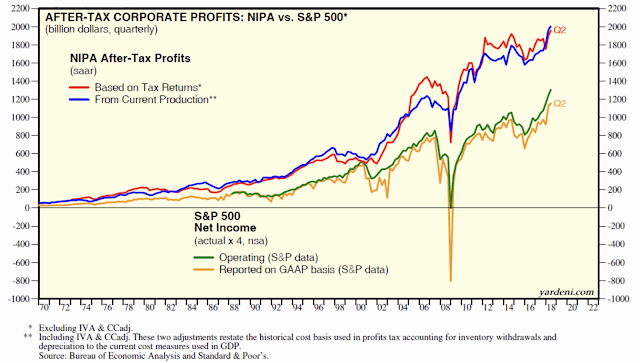 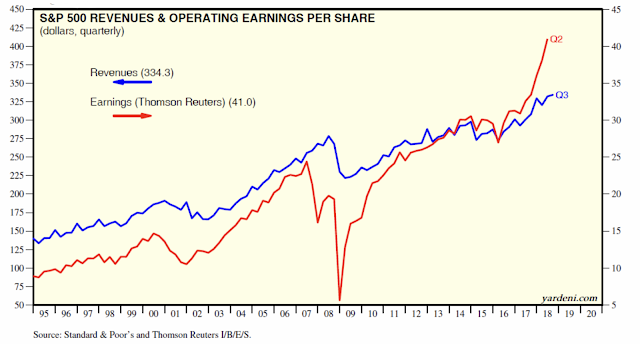 The monthly survey conducted by the National Federation of Independent Business (NFIB) shows that significantly fewer small business owners have been reporting concern about government regulation and taxes. The earnings component of the NFIB survey is the highest on record since the start of the data during 1974: 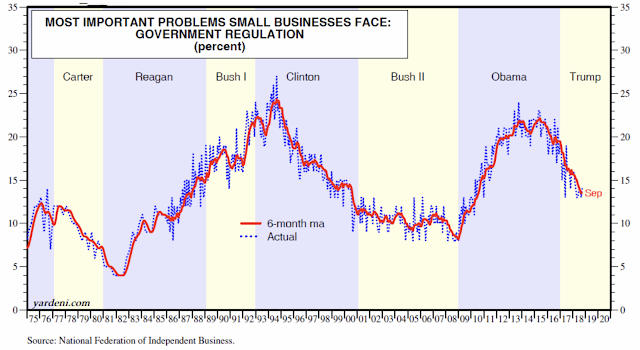 There has been ample cash flow to finance capital spending, share buybacks, and dividends. Firms are using incremental cash flow for the short-term benefit of shareholders rather than investing in future earnings potential. Buybacks and dividends have been about the same as after-tax operating profits for the S&P 500 in recent years.

No President has ever provided this much fiscal stimulus at this stage of the business cycle. In the past, such stimulus was provided during recessions or early recoveries, when the unemployment rate was at a cyclical high, not when it was near previous cyclical lows as it is today.

Trump is making a very big bet on supply-side economics. The idea is that tax cuts will boost growth by boosting productivity, so inflation should remain subdued. That could work as long as growth isn’t weighed down by rising interest rates. If inflation does come back, then the latest supply-side experiment will end very badly indeed.

(1) This analysis is derived from