129 Accounting for US Debt and US Assets

Since the last recession the federal debt has more than doubled. To examine what are now total US financial liabilities and assets, this blog will examine the balance that represents the current wealth of the population.

US financial liabilities are composed of federal, state, local, personal obligations as well as pensions that have been already funded. Unfunded liabilities for future benefits or pensions will be covered in a separate blog.

The current listed debt obligations of the US are $27.1 Trillion. With the 2018 GDP of $20.5 Trillion, this debt already exceeds the current earning capacity of the country:(1) 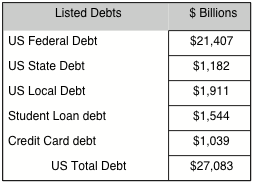 In addition to recorded debt, there are personally held debts such as mortgages as well as legally committed obligations:(1),(2) 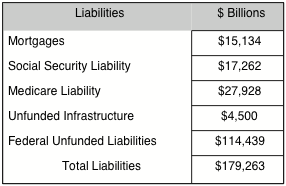 The the current federal deficit is $784 million/year and is projected to grow. The US federal budget deficit widened in the first 10 months of the fiscal 2018. It was 21% more than the deficit of $566 billion for the same period a year earlier. Government revenue fell 3% last month compared with a year earlier, while spending grew 10%. These deficits increased because business and individual tax rates were cut last year while government spending ramped up for defense. In view of continued budget deficits, the Federal Treasury cannot be seen as one of the sources for the reductions in debt or liabilities. (3)

US liabilities cannot be also reduced from current incomes on account of a persistent negative balance in trade that is currently $827 million/year and projected to grow.

Are there assets that could become available to offset the debt and liabilities?

Cashing in net assets would not cover the entire debt. Assets held by small business, plus all corporate assets plus all household assets would cover $138 Trillion, or only 77% of the total. Such measure but would leave everyone impoverished.

The US population is wealthy because it owns 33.4% of the world's total assets. The total net worth of these assets (real estate, financial, etc.) is $93.6 Trillion.  That amount would cover 52% if existing liabilities.(5)

Existing debt and liabilities will have be ultimately repaid from financial surpluses generated by the US economy, or through a massive devaluation of currency. Drawing on corporate profits, or on the liquidation of all assets or on taxing everyone for everything is insufficient for paying off the listed debt of $27.1 Trillion as well as funding the liabilities of $179 Trillion.

The dominant role of the US - and the Dollar as the global currency - is therefore not sustainable.

The only favorable indicator so far are the US stock market prices, as measured by the Price/Earning (P/E) ratio.  Currently that is 146.5%.  Consequently financial assets are 46.5% overpriced.

The next recession will require a re-adjustment of the above analysis of the debt and liabilities in the blogs that will follow.