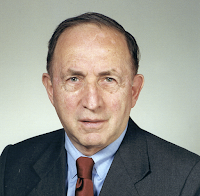 The capitalization of the stock market can be increased if corporate profits rise.  One way of achieving that is by cutting corporate taxes.  The problem with s uch an approach is a potential deficit in the Government treasury unless rising profitability also delivers greater tax revenues.  In this blog we will examine the effects of corporate tax reductions. 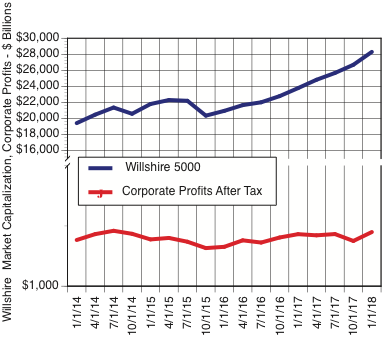 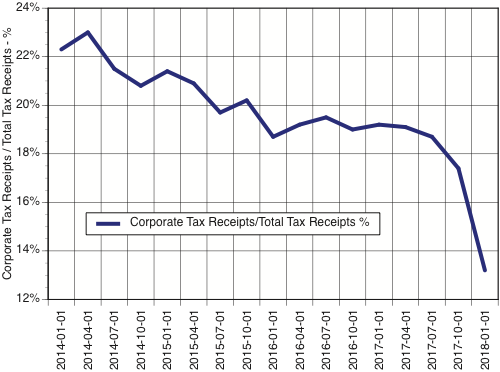 In the second quarter of 2017 a reduction in corporate taxes has resulted in an immediate decline. Federal treasury income was reduced from 23% of total Federal tax income to the current (first quarter of 2018) 13% of total income taxes. We do not have have second quarter 2018 income tax revenue as yet, be the reductions achieved so far are expected to continue at a steep rate of increase.

Meanwhile Federal public debt increased from $17.6 Trillion to $21.2 Trillion, or the sum of $3.6 Trillion: 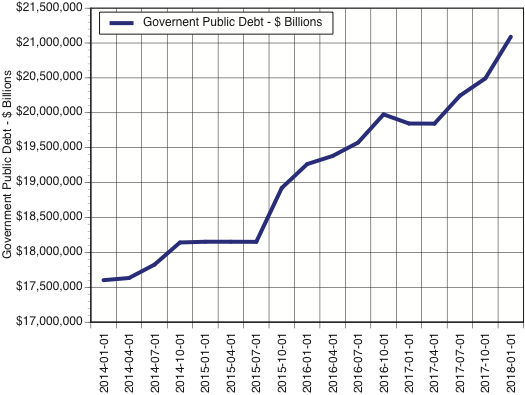 The amount of debt increase is significant, since in a short time of four years the increase in debt amounts to 20% of the US GDP (see https://fred.stlouisfed.org/search?st=Gross+Domestic+Product).

Much of this rise in debt was captured in the stock market in the form of rapidly rising capitalization, as measured by the Wilshire 5000 index:

The Wilshire market capitalization increased from $19.4 Trillion to $28.3 Trillion, or a rise of $8.9 Trillion. Therefore, the income tax cut so far explains only 40% of the stock market appreciation. How much of the market appreciation can be attributed to tax cuts cannot be explained because the increase in debt will become apparent only after Q2 through Q4 debt numbers will be available.  Meanwhile it is clear that the "animal spirits" of the investors have benefited from the tax cuts.

At the price of a rising debt investors found the lower corporate tax rates highly rewarding. However, it is too early to conclude that lower taxes will . not result in rising deficits, as long as the Treasure interest rates remain exceptionally low.  How such games with GNP and debt will ultimately play out remains to be seen, especially when the entire manipulation with taxes and the stock market is examined from the standpoint of USA global competitiveness vs. the rising Chinese economy.