120 Will Debt Destroy the US Economy? 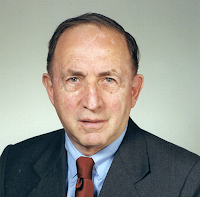 The US public debt now exceeds the GNP for the first time in history. During the prosperous years from 1972 through 1997 the public debt has always been kept as a fraction of its productive capacity, as measured by the GNP.  In the last 20 years the amount of debt not only increased, but has been enlarged as the Federal Reserved kept interest rates at historically lowest rates. About $12 Trillion of debt is now spread trough the economy in many forms, such as in brokerage debt, personal debt, credit card debt, education debt, state debt, municipal debt and most importantly, as unfunded liabilities. Despite its huge accumulation of wealth, the US can be now characterized as a debtor economy.

The current relationship between debt and GDP can be seen as follows: 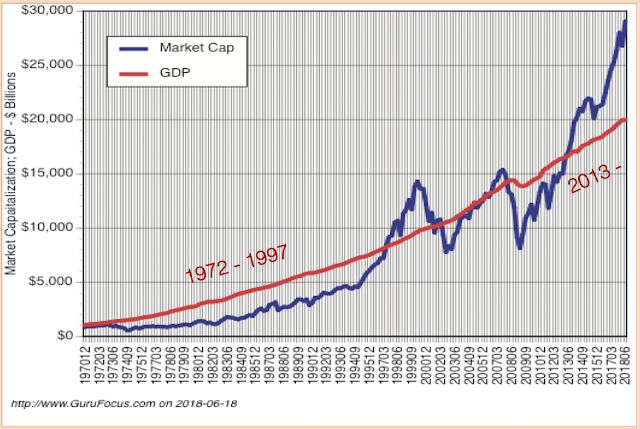 When the history of the relationship between GDP and Market Capitalization is examined since 1970, there has been a positive difference. The long term trend of the GDP was always greater than Market Capitalization. This relationship broke the trend in 1970, when market prices started showing wide fluctuation that represented recessions. The most violent departure from long-term trends occurred in 2006, when both the GDP as well as the Market Cap suffered from severe reductions. 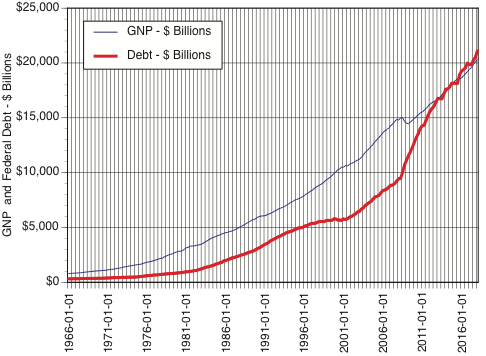 The recovery - lasting to this day - from the recession  took place with support from large scale injections of low-priced debt.  This trend is apparent from the chart above. From 1966 until the recession in 2000 the federal debt increased at the same rate as GDP. After the recession in 2006 there is a steep increase in the debt levels which exceeds GDP growth until it exceeds GDP in the first quarter of 2018 - and appears to be rising at faster rate.

Summary:
The underlying strength of an economy is measured in GDP expressed in current dollars.  Though the rise in the GDP does not adequately reflect inflation, it can be nevertheless related to market prices set on the stock market.

Since the 2006 recession the USA has depended largely on debt to support rising Market Capitalization.  Prosperity,  increasingly concentrated in the top 1% of the families continued, but the underlying superior competitiveness of the USA is getting lost meanwhile.

As result the future of the once rich USA is in this way mortgages its future that will be leading toward as less prosperous economy.