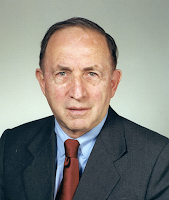 The history of economic growth is related to the sums of new net capital, free of debt, for any investments to be deployed.  Countries use surplus from savings to increase the production capacity of their economies. The installation of net capital as a productive investment is then the key to achieving long term gains.  Economic growth is generated only through investing profitably available capital and any proceeds from increased debts.

The significance of the net capital is its availability for new investments after depreciated assets have been replaced.  A country's economic growth can come only after highly profitable investments in innovation, but that must be done without the burden of debt that is greater than the country's earning capacity.

Historically the expansion of the US industrial economy, after 1840, was based on exceptional profits obtained from colonial countries (predominantly England) which could be then re-invested into projects that had the capacity for generating extraordinary gains for the investors.  Unfortunately, new financing since 1990 has became increasingly funded through debt that is funded mostly by China and Japan through their purchases of US Treasury bonds.

Net savings are the engine of economic growth, but that happens only after a net surplus is well reinvested.  The last hundred years of making ample capital available can be therefore viewed as attractive investments made by colonizing countries in high yield ventures. For instance, the growth of the impoverished USA after gaining independence in into the current prosperity can be directly related to investments by the British into USA goods production. USA incurred debt, but that was profitable and therefore could be repaid.

After the end of WWII the growth of the USA would be further stimulated by an enormous accumulations of capital that came under control of US investors.

To raise capital one must be able to deploy savings and then to repay debt. The relationship between savings and economic growth continues except the methods have changed. After 1945 the extraction of global savings through the USA financial markets is now shifting. The global model used to be based on the deployment of savings on a country by country basis. The new post year 2000 model that is now based on the sharing of an  international value chain through international trade even though this approach is now challenged by a new USA administration that appears to be favoring a mercantilist model of the 1930s.

The mercantilist model used national savings to build up national economies. The new global trading model is based on the the deployment of the international markets that relies on inter-related economies without regard for national borders. The paths of the migration from a USA dollar-based mercantilist economy to an international global currency are numerous but highly dependent on a completely different political environment where international leadership may be shifting to China.

The primary obstacle to sustaining continued USA leadership is the decline in the USA savings rate.  Without savings as well as rising debt levels the USA position as the leading financial source of investment will be compromised:

At present the diminished USA savings are instead channelled into rising personal wealth. Only limited funds are used to support an expansion of economic growth. The current concentration on corporate mergers and acquisitions cannot be seen as increasing USA wealth-creating capacity.

Corporate profits as well as debt have been then increasingly invested since 2000 into higher stock market valuations, e.g. stock market multiples that are now reaching historical highs in excess of 200% of GDP: 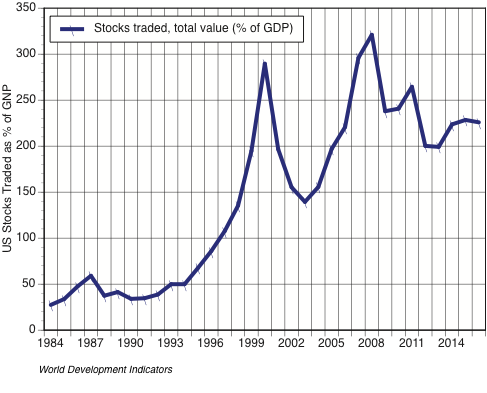 The net results of increased stock market valuations has been a shift towards greater income inequality how wealth is distributed among 200.8 million adults in the USA, which constitutes 5.4% of the global adult population. The USA total wealth to be distributed to its population is $40.4 trillion, which accounts for 36.2% of global wealth. Although the USA has experienced declining savings, it has been able to accumulate total wealth on a scale that has never been matched by any anyone.

However the USA also stands out when examined from the standpoint of concentration of global wealth in the hands of the 0.7% of high income adults (e.g. adults with income over $1 million/year). These adults hold over 46% of global wealth, which is held mostly in financial assets. Those statistics show that despite a decline in overall national  savings the inequality in the possession of USA wealth remains a disparity that the current political environment cannot resolve.

The exceptional wealth of the USA can be explained as an accumulation of  over a century of corporate profits and debt which were then channeled into capital investments that contributed to the growth of the economy.

The USA is now standing on the threshold of a transition into a post-industrial society. That requires large injections of new funds into long term innovations.  Unless that can be accomplished with a deployment of new net savings the transition into the next stage of the historical progress of the USA will not occur.