098. Where to Invest Retirement Funds?

According to prof. Shiller of Yale the current high valuations of the stock market have reduced the profitability of new investments to less than zero percent.  When rebalancing an investment portfolio where should one purchase different funds to realize better returns?


As shown on the chart below a retirement portfolio reconfiguration is confronted with rising prices of shares (e.g. rising market capitalization) as well as decreasing investment returns (e.g. declining expected returns).

While the capitalization of the US stock market gained 33% - from $12 Trillions in 2010 to $28 Trillions in the second quarter of 2018 - the current stock market returns have declined from 7% to a negative -2%. 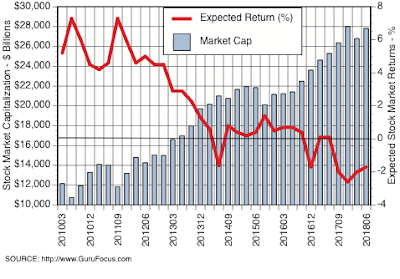 The changes charted above reflect not only the over-pricing of the stock market but also a decline in  its profitability from 7% in  2010 to the current losses of -2%. From an investor standpoint any rebalancing of a portfolio would require repositioning investment holdings to assets that show not only superior earning capacity well in excess of the prevailing 2%+ inflation levels. Any asset swaps would also have to be done with assets purchased at a discount.

A rebalancing of a portfolio is now necessary because the Government projected inflation rate in the foreseeable future (from 2018 through 2023) is projected as a conservative 2% annual increase in consumer prices. 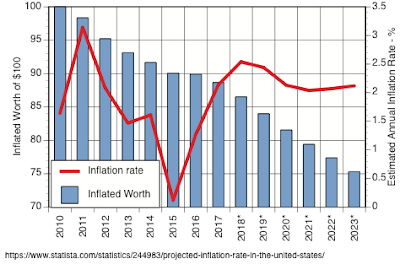 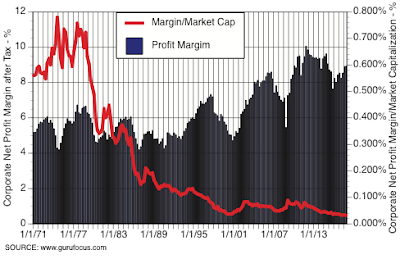 However, rising profit margins have not been reflected gains in the retirement portfolios. Hedge funds and actively managed funds recorded large gains in the last 20 years whereas money held by insurance firms in pension funds and in "robot" funds have showed steadily declining yields of new investments.

The above declines have their origin in a deteriorating  position of the US economy. One of the causes have been the rising trade deficit, with its large negative cash flow:

Such adverse influences are also reflected in a steady declining international position of the US:

The net International Investment position has been steadily reduced to the current levels of a deficit of -$600 Billion, which potentially represents a significant loss in the future valuations of the US currency.

In the short run, we must also consider current trends in stock market valuations which have now started to show a decline in stock market prices away from the most favorable growth indicators of last decade:

The January 2018 sharp peak in the Dow Jones average followed by a steady downward prices below a long term trend line can be seen as a possible indicator that the extraordinary favorable conditions may be coming to an end.

The collection of negative indicators presented in this blog should be seen as a warning that a long overdue recession may be approaching. As a precaution, investors may be advised to re-arrange their portfolio in favor of investments that are unlikely to depreciate steeply until a forthcoming recession cycle will come to its end.  For all practical purposes there are extremely low risk funds now available that offer returns that are near to the projected inflation rate of about 2%.  Meanwhile the retirement investors should hold sufficient cash to support their living expenses during an uncertain future.