Any assessment of the distribution of global must take into consideration the differences in the age of its people.  There is a large diversity in aging which influences the future growth and economics. It is the purpose of this blog to portray the difference in the importance of youth as well the prevalence of an aged population on the demographics of the world.

One way of viewing the importance of capital investment is to examine the relative effects of youth on demand for investments. A relatively large share of young people will consume large amounts of capital before their income can be expected to grow.  Regions with a high ratio of young people, defined as youth under the age of 14, will require over 20 years of investment in infrastructure and in production capacity, to support the growth of their economy: 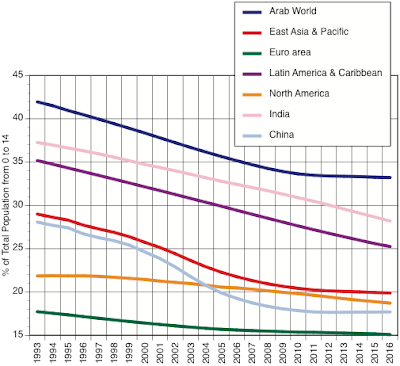 This graph show a decline in the your population for all regions, ranging to the current 33% for the fast growth Arab world to 15% for the slow growth Euro region. What is remarkable is the rapid decline of China from 28% in 1993 to 18% in 2016, which is a level below North America. The consequence of such declines indicates that the relatively low levels of GNP per capita will require huge amounts of investment capital for advancing over 2 billion of people in India and in China toward greater prosperity. 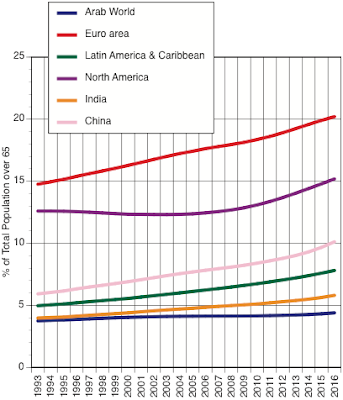 The rise of the aging population since 1993 applies to all regions. Less that 10% of the global population is located in the Euro area and in North America. As pensions and retirement income absorb a rising share of their budgets, lesser amounts of capital become available for funding the growth in the other regions. That is particularly evident in the Euro area that is topping the growing share of total income through early retirement, guaranteed pensions and shorter working hours.

From a socio economic standpoint, the aging of the wealthy European and North American population leaves the funding of economic growth with the poor regions out of their savings. During the development of the industrial economies for 1860 through 1960 the growth of wealth in industrial countries could be funded from profits that were collected through colonial-like profits. That will not be possible in the post-industrial future for the regions that now constitute close to 90% of the world's population.

At present it appears that only China, with its high savings rate of over 30% of GNP is able to accumulate sufficient capital to fund economic growth for itself and possibly for other regions through profitable global trade. It is also clear that the existing large accumulations of wealth in Europe and North America are culturally and politically unable to make sufficient investments to support what the world will now require.