088. The Hidden Canary in the Stock Market

A retired investor has become increasingly concerned about the continuation of recent rise in the stock market. This Blog will examine how some of the current market trends become predictable.

The current stock market has shown remarkable steady increase of 49% since the bottom of the last recession in 2009. [https://fred.stlouisfed.org/series/SP500]

Even the drastic drop yesterday (February 6) of 7% in the S&P 500 cannot be considered to be a confirmed recession indicator. It only indicates that we are well on our way towards a final break. 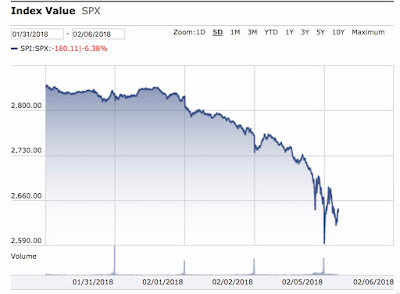 One of the challenges for an investor is to estimate how soon a steady rise in the stock market will come to the end. A retired investor must always avoid losses of assets even if that reduced a realization of gains whenever a reversal in the market cycle shows large potential gains.

The rule "Buy when market is Low but Sell when it is High" is called market timing. Almost all advisors, stock market fund managers and bankers will tell you that market timers are likely to lose money. Timers panic when the market is rising too fast and do not enter back into the stock market at bottom where the gains are usually the greatest.

According to Ray Dalio the stock market runs in similar cycles [https://www.principles.com/]. There are short cycles of up to three years that are then imposed on long lasting cycles that may last over fifty years. Therefore, the stock market must have repeated patterns. We have then a question how to detect the shape and timing of the cycle.

We have detected only one major cyclical phenomenon that appears to be repeated over more than eight recession cycles. Involves the cyclical repeat of the differences between long-term (10 year) and short-term (3 month) Treasury interest rates [https://adviseronline.investorplace.com/].

When the differences between the two Treasuries is plotted, a recurrent pattern emerges consistently since 1975 with more than five recessions. For the benefit of this blog the enclosed chart shows only details of the last three recession [https://fred.stlouisfed.org/series/T10Y3M].

Recessions are precipitated with a steep dive in the differences in interest rates, marked with a red arrow. A formal advent of a recession is then delayed until the conventional financial indicators indicate a decline in a broad spectrum of financial services. The difference between a zero spread in interest rates and the formal recognition of a recession may take as long as a year. Experienced investors with cash use these intervals to purchase stocks at a deep discount.

An interest rate spread rises rapidly after a recession has been declared. The stock market cycle then re-starts on its recovery. When another peak is then reached, the entire cycle commences on another way to a repeat decline until the differences in interest rates will become less than zero again.

Conclusion:
I label the cyclical behavior shown here as the "canary effect". Coal miners used to take caged canaries into mines and noticed when these sensitive birds became sick. Our analogy to canaries reflects a view that with a probability of more than 50% the recession-to-recession cycle appears to display predictive characteristics. The consistent decline of the spread between short term and long-term interest rates in the last half a dozen of recessions can be seen as a repeated pattern.

The "canary effect" cannot be seen as a reliable predictor. There are other external influences, such as political and socio-economic effects that will modify the timing of a recession. However, we have found here an amazing quantitative indicator that can be useful for guiding investor behavior.

As the "canary effect" is analyzed at the start of February 2018, it can be seen as a suggestion that the next recession can be at least one to eight months in the future. This estimate will continue to be updated on a monthly basis.