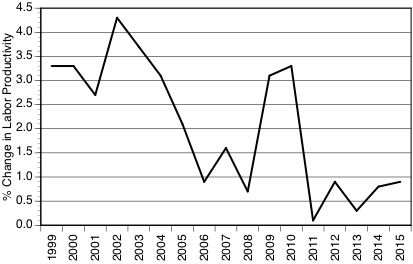 The growth in GNP per capita is ultimately driven by productivity, which is measured as total output per hour of the economy. These numbers may be questionable if  one considers that the proper measure should be total output (in $s) divided by the average cost per labor hour (in $s).

There are two variables that may affect this ratio: 1. The number of hours worked in the economy  has been declining as the % of workforce participation decreased.  Year-to-year changes in labor productivity shown here would not be affected.  2. The average cost per labor hour would change as wages increase or decrease. Again, that would not alter the slope of the productivity line.

CONCLUSIONS: These charts show that the economic viability of the US has been deteriorating. Productivity changes of less than 1% cannot support GNP growth of substantially more than 1%.


SOURCE: http://data.bls.gov/pdq/SurveyOutputServlet
Email ThisBlogThis!Share to TwitterShare to FacebookShare to Pinterest