Perhaps one of the most surprising statistics is the enclosed forecast of a decline in China's working population in the next 30 years.  The cause is the 1950 prohibition of Chinese parents to have more than one child.

Perhaps the greatest consequence will be in the rise in social costs for an increasing old population that will require support in retirement. There are insufficient funds to support the incomes of an aging population. 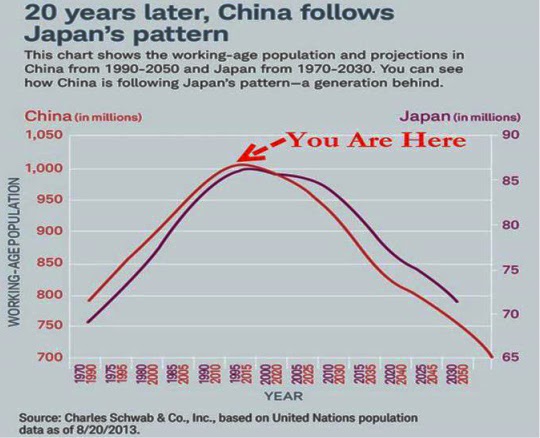 The decline in the working population can be offset through innovation, such as through large scale application of robotics and automation of knowledge processes. According to prof. Solow, the driving variable  in economic  growth is through the improvements in technology. Whether the governance of China will be suitable to impose innovations on the economy, including infrastructure development, remains as one of the key issues to be addressed.

IMPLICATIONS: As China GDP exceeds the GDP of the USA and increases its GDP/Capita a rise in the costs of capital will be needed to pay for old age pensions.