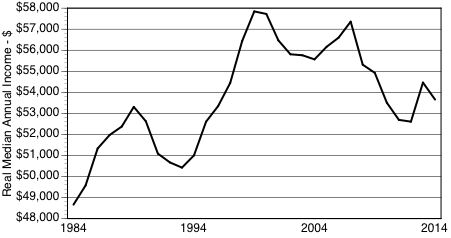 The primary source of retirement investments would be families with already grown children, which will most likely be primarily families aged from 45 to 65. Raising a family would have consumed most of the available money. To raise a child born in 2013 to the age of 18 would cost a middle-income couple just over $245,000, according to new estimates of the U.S. Department of Agriculture.  That amount has been rising and does not include the cost of college.

The largest potential contributors to retirement savings are the 5.9 million households earning over $200,000 in 2013. These households make up only 4.8% of the population. It is a group commonly designated as “rich” in surveys and in sociological studies, which leaves much of the remaining population possibly lacking adequate incomes to fund retirement. It is unlikely that households now earning below median income will have adequate income for supplementing their social security. Without additional income most families will have to concentrate on arranging for lower living costs to meet retirement needs.