The recent period of shrinking deficits will soon come to
an end. Between 2015 and 2024, annual budget shortfalls are projected to rise
substantially—from a low of $469 billion in 2015 to about $1 trillion from 2022
through 2024—mainly because of the aging population, rising health care costs,
an expansion of federal subsidies for health insurance, and growing interest payments on federal debt.

CBO expects that cumulative deficits during that decade will equal
$7.6 trillion if current laws remain unchanged. As a share of GDP, deficits
are projected to rise from 2.6 percent in 2015 to about 4 percent near the end of the
10-year period. By comparison, the deficit averaged 3.1 percent of GDP over the past
40 years and 2.3 percent in the 40 years before fiscal year 2008, when the most recent
recession began. From 2015 through 2024, both revenues and outlays are projected
to be greater than their 40-year averages as a percentage of GDP.

In CBO’s baseline projections, federal debt held by the public reaches 78 percent of
GDP by 2024, up from 72 percent at the end of 2013 and twice the 39 percent
average of the past four decades. As recently as the end of 2007,
federal debt equaled just 35 percent of GDP.

Such high and rising debt would have serious negative consequences. Federal
spending on interest payments would increase considerably when interest rates rose to
more typical levels. Moreover, because federal borrowing would eventually raise the
cost of investment by businesses and other entities, the capital stock would be smaller,
and productivity and wages lower, than if federal borrowing was more limited. In
addition, high debt means that lawmakers would have less flexibility than they otherwise
would to use tax and spending policies to respond to unexpected challenges. Finally,
high debt increases the risk of a fiscal crisis in which investors would lose so much
confidence in the government’s ability to manage its budget that the government would
be unable to borrow at affordable rates.

The consequences of the projected U.S. budgets on retired seniors are far reaching. There will be huge increase in individual taxes, as seniors with accumulated savings will be required to share an increased part of their holdings with tax authorities. 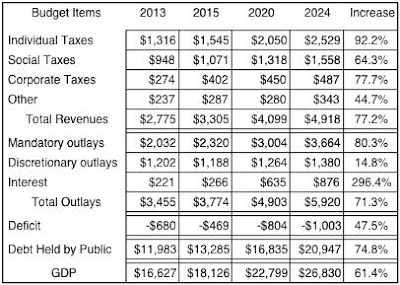