When evaluating the soundness of new US investments, one should also include an examination of the deployment of the US workforce. The capacity of invested capital to generate news jobs for a growing population should be therefore examined as one of the indicators of conditions for further profitable growth.
The trend of the share of the employment of the US workforce, as a share of total population, is shown since 1946.[1]  We have found that the past growth that has characterized workforce was broken in 2000. The recession from 1999 through 2010 shows that the steady growth in the US population is not correlated with the workforce: 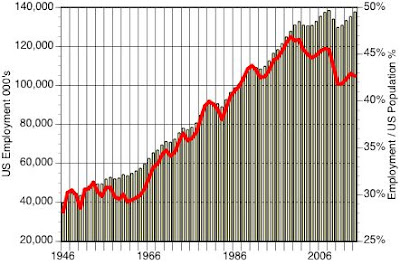 The peak Employment/Population ratio was reached in 1999 with 46.8% of the population participating in the workforce. That declined to a 41.8% in 2010. At that time 5% of the workforce stopped earning income. The US population of 310.2 million therefore excluded a workforce of 15.6 million people from earning wages and salaries that contributed to the GNP. The excluded population exceeded the numbers reported as “unemployed” as reported by official statistics.

The above graphics may lead to other insights. The 30% Employment/Population ratio from 1945 through 1959 probably resulted from the post-war restructuring of the economy. That pattern changed from 1966 through 1999 when the workforce grew to 47% participation rate.

It is not clear whether the US economy can recover its former high levels of workforce participation. If current rates of growth are projected to 2025, that will require at least 30 million new jobs.

Creating new jobs, which require new skills as well as investments into profitable capital is a challenge. At this point it is not clear how that can be accomplished.


[1] http://www.census.gov/
Email ThisBlogThis!Share to TwitterShare to FacebookShare to Pinterest