How Efficient are the DoD Enterprise Systems?


In March 2012 the GAO prepared for the Committee on Armed Services, House of Representatives, a report on DOD Enterprise Resource Planning (ERP) Systems. It included ten systems with total estimated current life-cycle costs of $22.7 billion. Theses systems would be replacing systems currently costing $0.89 billion. The replacement would take anywhere from seven to fourteen years. When finally installed, these systems would cost from $350 per uses to $207,561 per use to support operating personnel as shown in the table below. Calculating the payback as the ratio of currently estimated life cycle costs divided by the current operating cost of legacy systems, the payback ranges between 8.3 to 168 years. The current technology life is shorter than seven years.

Neither the project time line that averages ten years nor the projected payback that exceeds technology life appear to make the current DoD ERP’s an economically sound investment. 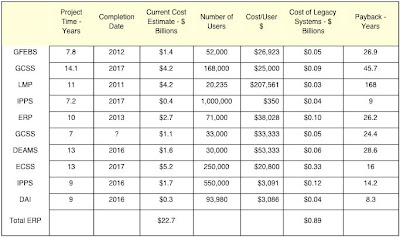 The above table is not a complete enumeration of existing ERP systems. For instance the huge Navy NEXTGEN ERP and many others are not included. However, a great deal can be learned from an examination of what we know about the economics of DoD ERP investments.

1. The IT costs per user suggest that the systems are necessarily complex and require a considerable spending for training and education. The IT life-cycle costs do not include the payroll expenses for military and civilian personnel and therefore the ongoing operating costs will be understated.

2. The elongation of the project time line can be largely explained by the architectural design how ERP’s are planned, designed, programmed and implemented. Each ERP is contracted for as a separate project wherein the design of the software and operating practices are defined separately at the contract level. Therefore, commonality of architecture does not occur.

3. Each system is driven by the rapid obsolescence of legacy systems in place. Therefore project management must negotiate with stakeholders not only the capabilities of the replacement system but also changes that are made in the interfaces existing or related applications. Such negotiation is time consuming, requires continuous modification of requirements and upgrading of features and functions as the project progresses. User executive will remain in place only for a much shorter time than the duration of the project. Therefore during the project revisions in scope will slow progress and increase costs.

4. The costs of every ERP will be inflated by the local variations in programming codes, but application interfaces, by adaptations to data center operating environment and by continued revisions in systems a requirements as new interface interoperability is injected in to specifications. 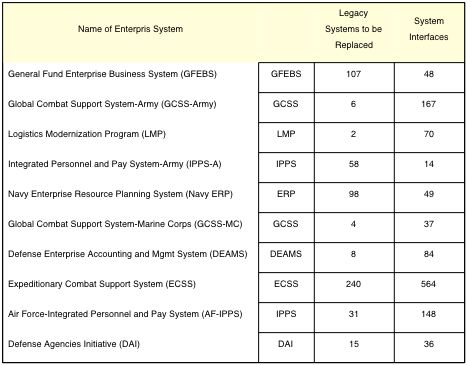 SUMMARY
The current approach to conceiving and implementing DoD ERPs is not sustainable even if ample funds would be available to support excessive design practices. The project time line can be shortened through adoption of a standard Plaform-as-a-Service process. The multitude of systems interfaces that will maintain interoperability during the transition from legacy to DoD ERP standards must comply with open source formats. Most importantly, the ability of multiple systems to maintain workable interfaces must be based on central control of data, because inconsistencies in data definitions and data formats imposes a large burden on program managers in trying to protect the utility of a stand-alone ERP.

In the future new efforts to start a DoD ERP will have to be guided by strong central direction that will dictate architecture and network organization. Without such guidance the current progress to complete largely obsolete stand-alone ERP will become a major impediment in delivering cyber operations readiness.