The OMB prepared analysis of the FY2012 IT budget for DoD offers new insights into the existing spending.  An understanding of the structure of IT spending is important for gaining a realistic insight how the just announced strategic directions can be achieved.

The key insight of 2012 spending is an increase of 5%, not a decrease in IT spending. The following table shows the changes:

The following shifts in spending are significant:
1. The shift of spending from services to agencies is continuing.  40% of the total DoD spending and 36% of all development is in agencies. Any proposed consolidations of applications must concentrate on the diversity of programs that are widely dispersed in a variety of agency organizations.
2. The Army shows a large increase in IT spending whereas the Air Force shows a remarkable decrease in the costs of ongoing operations. It appears that the Air Force is making good progress in the consolidation of shared applications.
3. The Navy shows a 57% increase in development costs. Since the Navy still continues operating with what is a mature NMCI systems and NGEN is just getting started, it is hard to understand the reasons for such an increase.

The projected $38.4 billion of DoD spending does not include the payroll costs of the uniformed and civilian workforce. According the DoD CIO, there are approximately 170,000 personnel supporting IT operations classified as support for information technology. If conservatively priced, this would add more than $17 billion to the total IT expense, or 44%. This manpower is by far the single largest cost component, far exceeding expense for computer hardware. In planning cost reductions the primary focus should be therefore on headcount reductions.

One also needs to consider the relative size of this manpower because it equals the headcount of the entire projected Marine Corps force. When DoD re-examines its “tooth-to-tail” ratios, the information workforce must be seen as a major opportunity to decrease the number of support personnel.

Missing from the DoD IT budget are most intelligence costs, such as the expenses for the DIA, NSA and a variety of national security functions. Since the future of DoD depends on the leveraging of intelligence efforts with warfare and a variety of cyber operations, a partial exclusion of such spending removes from the OSD oversight a critical component of enterprise networks.

A functional examination of DoD IT spending raises many questions about the organization of its projects. OMB divides IT spending into several categories:

1. 481 programs in Information and Technology Management consume half of the IT budget. In commercial terms that is usually classified as IT “overhead”. It deploys a variety of applications used primarily to deal with the proliferation of contractual relationships. For instance, the DoD Controller keeps track of IT spending with more than 5,000 expense line items. There is no question that any consolidation program should start with a sharp focus on how to reduce such expenditures.
2. A surprising discovery is found in the 656 supply chain management programs with a $3 billion budget – many with limited budgets – to keep track of asset records. A reduction in such systems should be seen not only as a way of reducing costs, but also as a means for streamlining the workflow so that tracking materials is simple.
3. The fact that only 28% of programs support Defense and National Security, which is the core business of IT, suggests that all reporting is incomplete and that the bulk of information technologies are classified as “weapons”, which takes them out of the IT classification. For instance, there are huge expenses for avionic systems or for missile defense. Though most of these costs deal with hardware and software, they are nevertheless defined as weapons and not as IT, where it would be excluded as a military capital cost.

SUMMARY
The FY2012 budget identifies line items that would affect the sequence of execution of an enterprise strategy for DoD. The current IT approaches have an enormous task of “cleaning up” the accumulation of up to thirty years of localized proliferation of programs that keep on consuming funds for support and maintenance.

Close to $14 billion/year development funds in FY2012 will have to be re-directed to generate the short-term savings while steering programs in the desired direction as outlined in http://pstrassmann.blogspot.com/2012/01/new-information-systems-directions-for.html.

Whether such funds will be available after austerity budgets become effective after FY2013 is not known.

There are many choices where to start. However, the $19.7 programs in the Information Technology and Management appear to offer the greatest potential. First, it is a functional area where the OSD CIO has unquestioned authority. Second, it does not intrude on National Defense or National Security mission-oriented programs or on functions that are tightly coupled to military operations. Third, it is the IT management programs that support the current proliferation of program initiative. By seizing control over the administrative processes that perpetuate the continuation of past practices, the ability to guide DoD programs towards a more consolidated approach will enhance the ability of central management to steer the development budgets towards the desired directions. 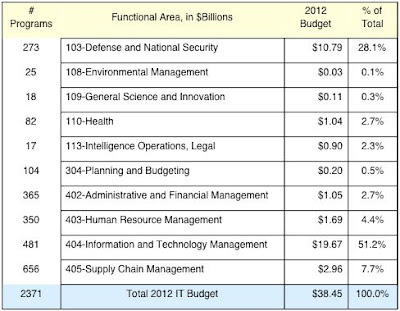 FIGURE 2
Email ThisBlogThis!Share to TwitterShare to FacebookShare to Pinterest