Why Cloud Computing Will Take a Long Time

The best way to understand cloud computing is to view it from the standpoint of a “workload stack” that describes the structure of all systems. Various vendors have organized computing differently, but all can be represented by means of a six-layer structure. The ultimate scope of cloud computing, when all information technologies would become potentially available as a service, would be $1,690 billion (in 2010 IT costs): 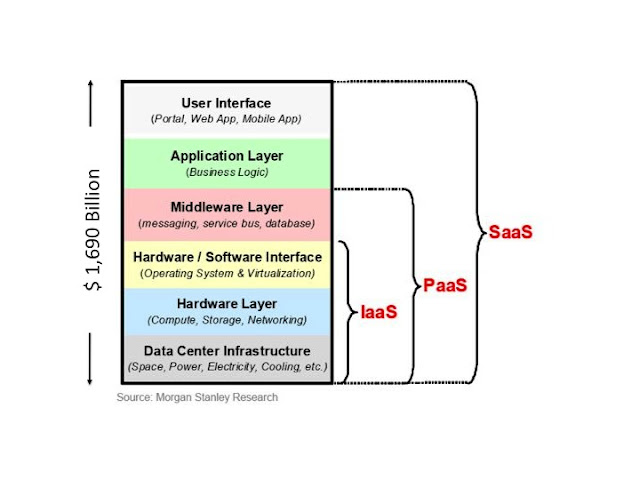 How far is cloud computing in 2011 from where it would have a major share of total IT spending? Before we can answer that question, it would be useful to examine a history of how various generations of computing organized their workload stacks.
In the period from 1955 to 1975 vendors, lead principally by IBM, wedged the layers of the entire stack into a tightly coupled set. Each stack layer would be dictated by IBMs decision what hardware and software to use. Any attempts to introduce an element of choice into operations, such as introducing other vendor’s disk drives or printers, was allowed only after regulatory intervention.
From 1975 there has been a gradual loosening of IBMs control over the entire stack. Microsoft managed to tear the layers apart by creating a separate server stack to support personal computers. The Microsoft stack was different from the server stack that was running in the data center or at a “server farm”. This resulted in what is known as the client/server architecture, which is dominant to this day.
The problem with the separate client/server arrangements is a growing inefficiency. Millions of separate server computing stacks was created that each had individual computing, storage and networking layers. The server stacks were almost always incompatible and could not share hardware layers across several stacks such as computing power, disk drives or communications switches. As result the millions of server stacks were poorly utilized. There was no way how separate computing assets could share the capacity of different computing devices.
The client/server arrangement also suffered from a diversity of operating systems. There was a proliferation of “middleware” how various developers installed software that was placed between the operating systems and the applications.
When the hardware layer plus the hardware/software interface plus the middleware layers were installed for diverse applications, the number of combined choices became very large.  A customer was forced to break up the enterprise into separate computing enclaves (also called “silos”), which were neither interoperable nor capable of sharing processing capacity. For instance, in the Department of Defense there are well over 10,000 separate computing enclaves that collectively have an excessive amount of unshared capacity. Each enclave was built to accommodate expected peak workloads.  The combined capacity far exceeded what was needed. The total capital costs were excessive.  The total operations expense for maintaining individual enclaves were a large multiple of what would be otherwise sufficient.
On account of the existing inefficiencies cloud computing should be seen first and foremost as a way of combining individual application stacks into assets where capacity can be shared.  The second objective of cloud computing is to aggregate capacity so that storage resources, compute resources, applications and the interface can be managed separately and independently. This means that every shared layer in the enterprise stack have the capacity to be engineered for its own optimization: 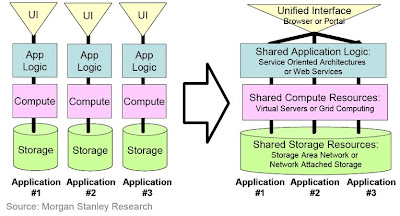 Storage resources would be shared across all applications. Compute resources would be shared across all applications. Application logic would be shared across all software programs. User interfaces would be common across all applications.
Best practices for the management for storage, compute resources, application logic and user interface would be able to change vendors and operating practices without the need to tightly couple each stack layer with its proximate layers.  Systems would be modular, which means that changes in technologies could be made incrementally rather than having to restructure an entire stack, which is the prevailing practice.
There are vendors that accomplish the separation through  “public cloud” services or as “private cloud” services. There are hundreds of firms now offering various combinations of cloud services. Different firms may pursue diverse approaches of how to organize for delivery of cloud computing stacks.
ASSESSMENT OF CURRENT STATUS
The ultimate objective of cloud computing is SaaS. This gives a vendor complete control over every layer of the stack. The most aggressive SaaS firm is SalesForce. It summarizes its offering by stating that it has “no hardware, no software, no headaches” by concentrating exclusively on the delivery of a full suite of Customer Relationship Management (CRM) methods. A wide range of out-of the-box applications is available. These are custom-tailored for the needs of specific vertical markets or business processes. SalesForce 2011 revenue is $1 billion, which represents less than 0.1% of the global total IT spending of $1.69 trillion.
There are hundreds of cloud companies that offer services that imitate the SalesForce model. In each case these are relatively small niche firms that provide access to specialized software where a customer does not wish to manage their own computer organization. Nevertheless, the pure SaaS business typified by SalesForce has taken only an insignificant share of the IT business.
A more ambitious effort is the recent commitment by Apple to restructure itself to operate as somewhat of a SaaS set up. Apple can do that because it has been always successful by managing its entire computing stack. It makes its proprietary hardware, offers a proprietary operating system as well as a proprietary browser. It originates its own applications while those provided from other vendors have to conform to its tight protocols. With the projected 2011 revenues of $100 billion and a very high growth rate Apple is the most successful IT firm in the world. However, its focus is limited by concentrating primarily on consumer computing.
The Apple cloud strategy is evolutionary. It shows a high executive level commitment to cloud computing. It will migrate from its proprietary strength in customer-owned hardware and software to relocate shared storage resources to the cloud.  Even then, the Apple share of SaaS computing will represent only a small share of its revenues that will be derived primarily from the sale of hardware devices and not from cloud fees.
Microsoft has already declared its plans to move into cloud computing by offering a mix of IaaS and PaaS services.  With 2011 revenues of $64 billion it has so far shown only a limited executive commitment to its Azure cloud offering. It is not as yet apparent whether Microsoft can aspire to become a significant cloud services provider. Microsoft depends on revenues from a limited set of application suites and from selling operating systems that are increasingly getting squeezed out by open source offerings. The prospect of Microsoft cloud computing taking a significant share of total IT spending is uncertain.
What will be the cloud strategy for Google is yet to emerge. This is a firm with $35 billion revenues and is highly profitable. Its Gmail offering has over 200 million customers on the Google cloud. Its Android operating system controls the major share over smart-phone devices in the world. However, Gmail nor Android are offered by Google at no cost and therefore cannot be counted as a profitable venture.  Its ChromeBook offering is potentially a pure SaaS device. However, a comprehensive strategy is yet to emerge from Google that would reveal a business case of how to migrate into a cloud environment.
By far the largest IaaS provider is Amazon.com. The best revenue number available for its EC2 cloud service is $500 million for 2010. These services can be best seen as a form of outsourcing of servers from companies that do not wish to own computing assets to Amazon on a pay-for-use basis. Though there many other IaaS small firms, their aggregate revenues do not add up to a significant share of total IT spending.
Base on reviewing the major cloud firms, such as Apple, Microsoft, Google and Amazon, the prospects of large gains from cloud computing are not significant as yet. Despite enormous media attention, public cloud computing so far takes only a minute share of total information spending.
However, the story may be different in the case of private clouds, where individual firms are proceeding at a rapid pace to virtualize their data centers. Almost every CIO in the world is proceeding with a cloud project. What progress firms are making in moving into private clouds or what share of their workload is shifted to public clouds has not been reported.
We conclude that the adoption of cloud computing still remains only a distant goal. It may take decades before cloud computing will manage a large share of the world’s IT spending.
Email ThisBlogThis!Share to TwitterShare to FacebookShare to Pinterest