The projection of trends in cloud computing, as of May 23, 2011, (http://www.google.com/search?q=Cloud+Computing+Takes+Off+MOrgan+stanley&ie=utf-8&oe=utf-8&aq=t&rls=org.mozilla:en-US:official&client=firefox-a) reveals the following trends that DoD must consider in its planning:
1.           Cloud workloads in the USA will increase at a 50% CAGR in the next three years— which is much faster than the average increase in total DoD IT spending, which is expected to be close to zero in the next three years.
2.           The percentage of DoD CIOs that are planning to moving their workload to cloud computing is expected to rise. This is evidenced by the attention devoted to meetings about cloud computing in Washington.
3. DISA has staked out a claim that it wishes to offer cloud services at its 14 DISA Defense Enterprise Computing Centers (DECC) (http://www.disa.mil/computing/index.html). The capability to absorb a large number of servers into the DECCs using cloud software has not been demonstrated so far.
4.           The growth rate of DoD enterprise-owned servers will decline as the pressure to reduce the number of data centers is increasing. Component operated server hardware becomes the primary area for realizing savings from the migration to cloud computing and server consolidation. The expected spending for in-enterprise server spending will decline as the equipment is shifted into DECCs.
5.           The technical directions will require the shifting of the workloads from server farms operated by military services to where OMB cannot count them any more as a “data center”.  As results there will be an increased reliance on virtualization of all servers and on much denser workload-to-server ratios as result of higher capacity utilization. That should generate large savings.
7.           On-premise private computing by the military services will continue to dominate the processing of DoD workloads in the foreseeable future because legacy systems are tightly wedged into existing operations. To extricate from that would require incremental funding that will not be easily available.
A highly optimistic projection how workloads could be shifted is best illustrated in the following estimate what will be the overall US pattern of operations: 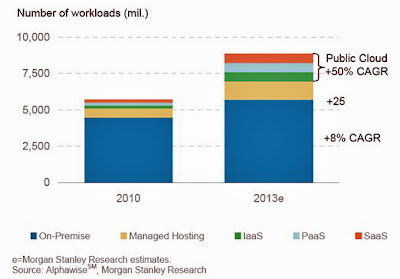 SUMMARY
The net results of the trends listed in this text can be a major reduction in the amount of investment in IT capital in DoD. There could be also large cuts operations and maintenance costs, such as in administrative and support personnel payrolls.
If the moves listed above are executed swiftly, the break-even on the investments for making the shift to cloud computing could be in the 12-18 month range. However, as is demonstrated by the latest attempts by the Army to move e-mail into the cloud-computing environment (see http://pstrassmann.blogspot.com/2011/05/armys-e-mail-move-to-disa-cloud.html) that does not look promising. The large amount of up-front funding for a project that would take over three years does not seem to satisfy the Congress.
It will require a more aggressive initiative to get the DoD to catch up with the rapid pace that is now followed by commercial firms.
Email ThisBlogThis!Share to TwitterShare to FacebookShare to Pinterest