Will Standards Define the Cloud Environment?

Standards are critical with increasing pressure to ensure that cloud technology investments remain viable for years to come. Standards allow CIOs to select products that best suit their needs today–regardless of vendor–while helping to ensure that no proprietary constraints arise when new systems are put in place in the future.

The goal of any Open Cloud Standards is to enable portability and interoperability between private clouds within enterprises, hosted private clouds or public cloud services. 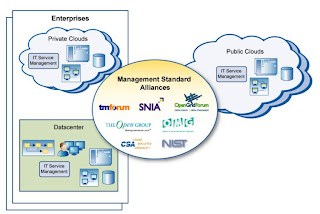 The prime mover of cloud standards is the Cloud Security Alliance (CSA), which includes CSA Security Guidance for Cloud Computing, CSA Cloud Controls and CSA Top Threats * There is also a CloudAudit Group associated with CSA. It is a volunteer cross-industry effort on cloud, networking, security, audit, assurance and architecture backgrounds.

OVF is a common packaging format for independent software vendors (ISVs) to package and securely distribute virtual appliances, enabling cross-platform portability. By packaging virtual appliances in OVF, ISVs can create a single, pre-packaged appliance that can run on customers’ virtualization platforms of choice.

The European Telecommunications Standards Institute (ETSI) has formed a TC Cloud Interest Group to help with the formulation of standards for cloud computing. So far its work is based entirely on US standards bodies.

The National Institute of Standards and Technology (NIST) role in cloud computing is to promote the effective and secure use of the technology within government and industry by providing technical guidance and promoting standards. NIST’s work to date has focused on the definition and taxonomy of cloud computing. Such definitions serve as a foundation for our upcoming publications on cloud models, architectures, and deployment strategies. So far no formal software protocols have been issued.

The Object Management Group (OMG) has formed the Open Cloud Consortium (OCC) which has generated set of scripts which generate large, distributed data sets suitable for testing and benchmarking software designed to perform parallel processing on large data sets.
The Organization for the Advancement of Structure Information Standards (OASIS) has formed the OASIS Cloud-Specific Technical Committees, which address the security issues posed by identity management in cloud computing.

The Open Group has formed the Cloud Work Group to create a common understanding among buyers and suppliers of how enterprises of all sizes and scales of operation can include Cloud Computing technology in their architectures to realize its benefits.

The TM Forum is an industry association focused on enabling IT services for operators in the communications, media and cloud service markets. It operates the TM Forum's Cloud Services Initiative to promote the use of cloud standards.

The Institute of Electrical and Electronics Engineers (IEEE) is in the process of organizing the IEEE P2301 group that will produce a guide for cloud portability and interoperability profiles.

SUMMARY
I have counted over twenty organizations involved with the standardization of how to manage cloud computing. So far, only one formal standard that addressed virtualization has been published, though not widely adopted as yet.

It is clear that the various standards organizations are lagging far behind the actual work done by cloud vendors who are working hard to buttress their competitive positions as proprietary (or hard to dislodge) suppliers. From the standpoint of enabling portability of applications across various cloud service offerings we do not find any evidence that vendors would be relying on standards bodies to make customers interoperable.

As was the case with Microsoft thirty years ago, interoperability of the cloud environment will not be achieved by means of public standards. It will be delivered by means of adoptions that will be implemented by a few of the strongest software vendors.