The IT dashboard, published by the Office of the Federal Chief Information Officer, provides comprehensive information about US Government IT spending for FY11. *

Since the Department of Defense uses 46.2% of total Federal IT spending, the structure of its spending offers useful insights.

Half of systems projects have budgets of less than $1 million. These projects, usually executed as separate local contracts, depend on unique equipment and software configurations. Although these projects account for only 1% of total spending, there is a large population of users that depend on these systems for everyday support.  How to migrate such projects into a shared cloud environment is a problem that is waiting for resolution. 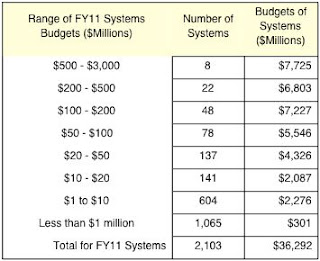 The 78 systems with FY11 budgets of more than $100 million are multiyear programs. How to insure interoperability of multiple applications in near real-time, each with diverse databases is a problem that calls for a better resolution. Since these systems are largely under the control of contactors the absence of an overall DoD shared architecture is likely to inhibit a transfer into shared cloud operations.

A more interesting perspective on DoD spending is an examination from the standpoint of the functions IT supports. 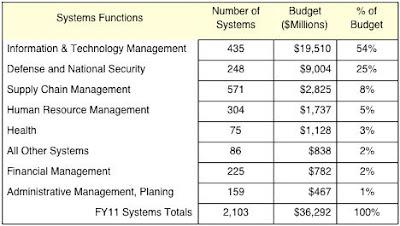 The largest share of the budget – 54% - is devoted to “Information Technology Management”, which largely represents investments and operations in DoD IT infrastructure. The “warfighter’s” domain consumes 25% of the IT budget, with logistics using 8% of the total. If one considers that the primary objective of DoD is to support warfighter missions, then a quarter of all IT spending appears to be minimal. However, one must consider that fact that the current IT statistics does not include the costs of military and civilian personnel. It also excludes all IT that has been integrated into weapons. Consequently the relatively small reported share of IT is likely to be misleading.

Systems included in “Information and Technology Management” are critical to the effectiveness of IT. They include the costs of the entire infrastructure, which supports all other functional domains. The top 25 systems, accounting for 62% of this spending are listed as follows: 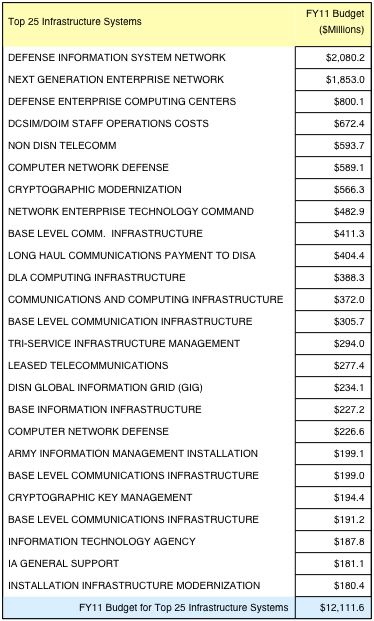 SUMMARY
A review of DoD FY11 budgets shows that a disproportionately large share of resources is committed to paying for numerous infrastructures. When this is compared with commercial practice, DoD spending on Information Technology Management can be viewed as disproportionate.

In comparison with prior budget data, the importance of Information Technology Management/Infrastructure has increased from 47% in FY07 to 54%. Meanwhile, the share of the budget dedicated to warfighting missions has declined form 36% in FY07 to 25% in FY11. How much of that can be dues to mis-counting by OMB is not clear. However, a review of itemized systems shows that DoD has been increasingly shifting money into its infrastructure by constructing new systems in this function.

One of the explanations for such proliferation is historical.  Most of the large multi-year and multi-billion programs have involved contracts that included the creation of unique infrastructures.

Perhaps the most critical reason for such diversity is the separation of accountability for spending. Warfighter and business application budgets are included in Army, Navy, Air Force and Agencies development costs. After that the diverse Acquisition organizations handed over operations either back to the Army, Navy or Air Force, or to Agencies that starting taking over the management of infrastructures.