Infrastructure-as-a-Service (IaaS) is the DoD’s first implementation of cloud computing. DISA has set up the Rapid Access Computing Environment (RACE) program as offering IaaS solutions. IaaS is based on self-service provisioning where DISA acts as a broker that arranges access to cloud operators such as Amazon, Google, Rackspace, Terremark and others. *

Whether DoD customers must access IaaS services only through DISA, acting as an intermediary, is not clear. Anyone can gain access to IaaS with only a credit card. When contractors work on an Army system, whether they use in-house servers or much cheaper cloud company servers will not be readily apparent.

So far RACE has been used for development and testing, which is performed by DoD contractors. Many military applications have been already developed and tested using cloud-provided processing capacity.
DISA wants now to progress further to see if DoD can start using RACE for the execution the entire applications life cycle process, including production.

Accessing IaaS services is not a simple matter. An application must be placed on top of a proprietary middleware packages. These packages are needed so that an application can function within the vendor specific environment. In effect, such a middleware represents a potential lock-in for a customer seeking an IaaS place for an application to run on.

Here is an example of the middleware options – many are mandatory – that must be deployed before an application can be tested and run on Amazon Web Services (AWS), one of the most popular IaaS services: 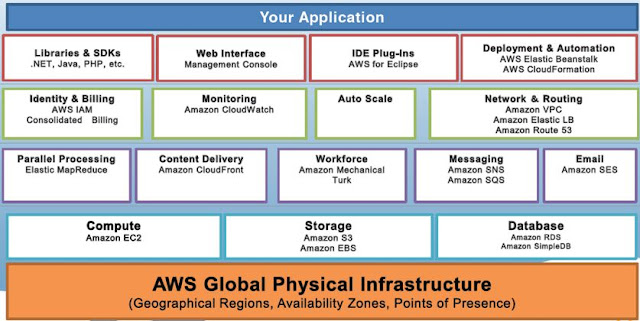 Depending on the purpose for using IaaS, a customer will have to define the settings for each of the middleware options. This may differ for different situations and can create - de facto - a condition where moving an application to a different IaaS vendor would be laborious.

When it comes to running applications in a production environment, IaaS may not offer an advantage from a cost standpoint. Hosting an application database on the Amazon proprietary offering, such as the Amazon RDS, could ruin the interoperability with related of IaaS databases that are run by other IaaS vendors. This would be so particularly in the case of real-time operations.

SUMMARY
Before DoD proceeds with the placement of its run-time operations with diverse IaaS vendors, DISA must see to it that standards are in place that will assure interoperability and compatibility across proprietary solutions offered by competing IaaS vendors such as Oracle, which supports only Oracle specific IaaS.

Verification of interoperability will have to take place whenever there is an exodus to IaaS providers from the Army, Navy and Air Force instead of consolidating data centers into the Defense Enterprise Computing Centers (DECCs).

Current targets to eliminate most of DoD’s 772 data centers could be potentially met by shifting the computer processing workload to IaaS firms. Contractor headcount will be reduced and computer assets will be removed form DoD books. This will look good because it would deliver reductions that meet OMB numerical targets.  However, if such moves are not tightly managed by means of standards, DoD may end up with an even more fractured operating environment than is currently that case.