How to Fit DoD into the Cloud Environment?

It is now an OMB policy that DoD should start migrating into an architecture that is based on cloud-like concepts. * There are leaders who have suggested that transporting DoD applications into a Google-like environment would solve persistent problems with security, interoperability and cost.

Before anyone can subscribe to a cloud-centered solution it may be useful to examine the current state of DoD applications. What we have now is fractured and often broken, non-standard, custom-fitted and without a shared data environment.

To move thousands of such systems into a well-ordered Platform-as-a-Service or Infrastructure-as-a-Service will require enormous expenditures. It will require restructuring how systems are designed, how they can run and in what data centers they can operate.

To gain a better understanding, in a constrained budgetary environment, it may be useful to examine what are the “as-is” conditions of the existing systems before making “to-be” projections. Most importantly any plans need to be supported by funding commitments and a realistic schedule.

The following statistic shows the number of DoD business systems plotted against their respective FY11 budgets: **** 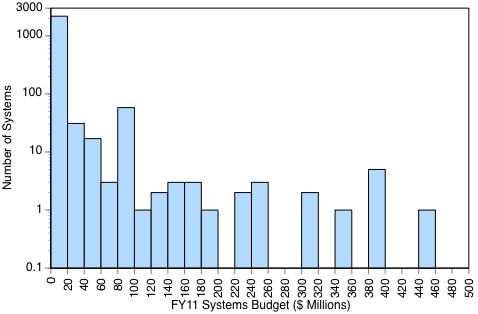 Most of these applications are categorized either as “legacy” systems to be phased out, or as “interim” systems, which have a limited life expectancy. There are 1,165 such systems, or 55% of the DoD total, which are obsolete and require ultimate replacement.


How DoD systems are distributed is illustrated in the following table. Each of these systems will contain numerous applications: 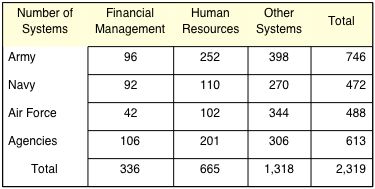 The above table shows that about half of all systems are in Financial Management and in Human Resources areas. The Business Transformation Agency, now discontinued, had spent six years attempting to unify these applications, but a large number remain in place nevertheless.  Numerous independent Agencies also control 613 systems systems. Such diversification into different organizations will make any consolidations very difficult.

SUMMARY
The current proposals to ultimately merge 1,165 obsolete systems into 1,154 “core” systems may not be executable. The problem lies not with the proliferation of systems (each supporting many applications) but in the contractual arrangements for small systems, each possessing its unique infrastructure. Most of the current 2,319 systems have been built one contract at a time over a period of decades. Limitations on funding have worked out so that most of these systems ended up will  unique configurations of operating systems, diverse application codes, incompatible communications and data bases that are not interoperable. With over 76% of software maintenance and upgrade in the hands of contractors incompatibilities were then a natural outcome. Meanwhile, DoD's high turnover in managerial oversight resulted in a shift of architectural control over system design to contractors.

There is no reason why the Army should not have 252 human resources systems and even more applications. There is no reason why the Navy should not have 92 financial systems with hundreds of diverse applications to manage its affairs. The issue is not the number of reporting formats - that must server diverse user needs - but the costs of funding completely separate systems to deliver such variety.

Over 60% of the current costs for Operations and Maintenance are consumed in supporting hundreds and possibly thousands of separate communications, data management and security infrastructures. Instead of such great multiplicity of infrastructures, we need only a few shared infrastructures that  should be the support all  of DoD's systems.

If DoD can acquire a Platform-as-a-Service or an Infrastructure-as-a-Service capability, the Army, Navy, Air Force and Agencies will be able to generate and test quickly many inexpensive (and quickly adaptable) applications to be placed on top of a few shared infrastructures. Such an arrangement would results in much cheaper applications.

Instead, DoD should re-direct its efforts to completely separate its infrastructure and data management from applications. The new direction should be: thousands of rapidly adaptable applications, but only a few secure cloud infrastructures for support.

* U.S. Chief Information Officer, Federal Cloud Computing Strategy, February 8, 2011
** http://dcmo.defense.gov/etp/FY2011/home.html (Master List of Systems)
*** DoD IT spending excludes the costs of the military and civilian IT workforce.
**** There are only eight projects reported with budgets greater than $500 million.
Email ThisBlogThis!Share to TwitterShare to FacebookShare to Pinterest