Every cyber operation contingency plan must include a case in which the use of most satellite connectivity will be lost.  Whether such failure is caused by adversary intervention, malicious jamming or mechanical failure is irrelevant. Military operations depend on the availability of assured bandwidth. A contingency plan must also assume conditions of failures when only degraded capacity is available for conveying minimum essential bandwidth. Partial communications must allow Network Control Centers to cut off low priority transactions, while keeping up SIPRNET or supporting only channels that deliver mission-specific messages.

There are several options that could be considered as a replacement for satellite channels:

1. Use of high-altitude vehicles.  An example of this solution is the Global Observer Unmanned Aerial Vehicle (GOUAV) or its successors, including solar powered planes.  GOUAV has already conducted test flights. It will fly at an altitude of between 55,000 – 65,000 feet for 5 – 7 days.  Longer times aloft are likely to be feasible in the future. That’s above the weather and above sustained conventional airplanes. That height also helps due to the laws of physics, which allow aircraft at that altitude to cover a circular area on the surface of the earth up to 600 miles in diameter.

The goal for Global Observer is for payload capacity of >1,000 pounds. It uses liquid hydrogen fuel and fuel cells that drive 8 small rotary engines.  It can handle communications intercepts over a wide area. In the future it will have the capacity to augment transmission of telecom bandwidth. It could be designed to act in lieu of GPS satellites, which are particularly vulnerable to very low cost jamming devices.  **  Multiple communication and remote sensing applications have already been demonstrated including high definition broadcast (HDTV) video, and third generation (3G) mobile voice, video and data using an off-the-shelf mobile handset.

The unit costs of loitering airplanes that act as store-and-forward stations make their deployment attractive. They are mobile and can be repositioned to avoid interference. Without crews they are easy to replace. They can be launched only as needed anywhere in the world when needed.
There are also other technologies available, such as the Boeing X-37B Orbital Test Vehicle that could be used to place in orbit steerable platforms for communications.

High-altitude vehicles (HAVS) offer many advantages over satellites, whether they are in low polar orbits (100 to 1,000 miles) or in stationary equatorial orbits of 22,300 miles above the earth. HAVS can be launched quickly to support a military mission as needed, rather than holding a persistent spot in space. HAVS can be steered and can be recovered for technology enhancement.

2. Use of a combination of ground based and wireless “mesh networks”. Mesh networking is a type of networking where each node must not only capture and disseminate its own data, but also serve as a relay for other sensor nodes, that is, it must collaborate to propagate the data in the network. * In effect a wireless mesh network replicates the structure of the land-based and hard-wired Internet.

A mesh network can be designed using a routing technique. When using a routing technique, the message propagates along a path, by hopping from node to node until the destination is reached. For insuring all its paths' availability, a routing network must allow for continuous connections and reconfiguration around broken or blocked paths, using self-healing algorithms. As a result, the network is reliable, as there is often more than one path between a source and a destination in the network, which can include both wired as well as wireless links.

The nodes on a mesh can be stationary, such as transmission towers, buoys or aerostats, or mobile such as ships or UAVs. The connectivity between mesh nodes can vary depending on bandwidth, antenna design and available power. For instance, High Frequency (HF) microware links can be set up so that a fleet of ships can be positioned in a way that assures delivery of transactions via mesh-like connections to their ultimate destination.

Mesh networks can be also deployed tactically. It is possible to deploy low cost unmanned helicopters (such as the Navy’s MQ-8B Fire Scout) or long endurance helicopters (such as the Boeing A160 with 2,500 mile range). Swarms of these vehicles can be launched to act as store-and-forward communication nodes. At a moment’s notice they can offer instant connectivity for rapid attack expeditionary forces.
Mesh networks have the advantage that they can be built as an extension of existing networks that use optical fibers. The construction of mesh network can be done as an evolutionary program, without obsoleting legacy networks already in place. In this way they can function as redundant hybrid mesh connections, with existing ground links or HF ship-to-ship and ship-to-shore links routing transactions through the most cost-effective path.


3. Orbital Replacement for the NASA Shuttle.  The second version of the Boeing/Air Force X-37B has been orbiting at an elevation below the international space station.Depending on who you talk to, the space plane could be a prototype commando transport or (most likely) a spy satellite, though it can have a multipurpose mission because it can be steered. Potentially it could it could launch, repair, repair or reposition US or other satellites in low orbit. It could sneak up and disable or steal enemy satellites. Its pickup-bed-sized payload bay is particularly enticing to observers.
SUMMARY
The U.S. military cannot depend on satellites for support of its expeditionary forces. Even if degraded for transmission of only essential messages, multiple and fully redundant communications paths must become available. Unfortunately, the existing proliferation of network connections costs too much. It is also not interoperable. Its use of the available spectrum is profligate. To make available communication options that dispense with most of the satellite links will require a different approach to network design. It will require funding that will not be available unless costs can be extracted from the existing communication arrangements (see diagram below of antennas on an aircraft carrier). 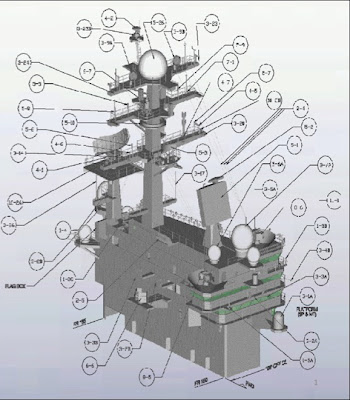 Right now it is not apparent that the centerpiece of DoD’s networks – the Global Information Grid (GIG) – has provided for such eventualities. Taking on the task for providing satellite-less bandwidth for its ships and expeditionary forces should be a priority tasks for the Navy’s N2/N6 organization.

* http://en.wikipedia.org/wiki/Mesh_networking
** http://www.newscientist.com/article/dn20202-gps-chaos-how-a-30-box-can-jam-your-life.html?full=true
Email ThisBlogThis!Share to TwitterShare to FacebookShare to Pinterest