Virtualization makes it possible to run multiple operating systems on a single server. It reduces capital costs by increasing the efficiency by requiring less hardware while decreasing the number of administrating personnel. It ensures that applications will perform with the highest availability and performance. It enables business continuity rough improved disaster recovery. It delivers high availability throughout the datacenter. It improves desktop management and desktop control with faster application deployment and fewer support calls due to application conflicts. 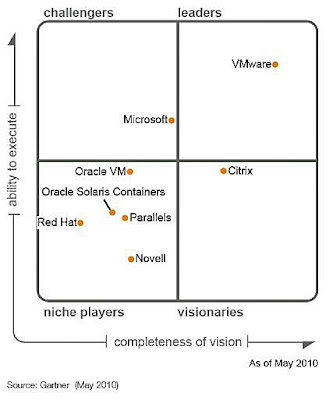 Terremark is a leading VMware customer. They publish prices for using its VCloud Express. Terremark is $350 million provider of IT infrastructure services with twelve datacenters in the United States, Europe and Latin America. It can be used as a benchmark for making comparisons with other cloud data center rates (such as from DISA). The unit list prices are as follows: 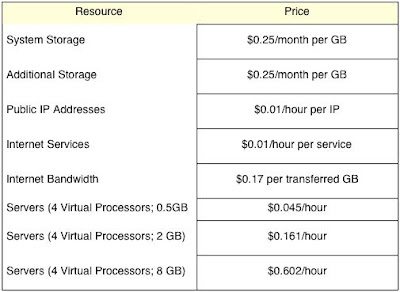 What are then the potential savings that can be gained from the virtualization of 10,000 servers? The Total Cost of Ownership (TCO) program will be used to make the computations. *

Virtualization enables a substantial reduction in the number of servers, with consequential reductions in operating manpower, energy and infrastructure costs. A 75% cost reduction, over a five-year period is achievable, with break-even time of less than one year.

The largest cost reductions are realized from the elimination of Capital Expense (CapEx) costs, as servers with more core and more processors replace configurations that cannot operate at high levels of utilization since they cannot share computing power.  Operating Expense (OpEx) reductions are found almost entirely in the reduction of personnel. “Other” costs reductions come from substantial reductions in the costs of electricity in support of computers and air conditioning.

A further breakdown of cost reductions is shown in the following table. There is also a reduction in the number of desktops, since the personnel headcount is also cut.

Power and cooling energy savings are highlighted in the following table:

SUMMARY
Server virtualization savings are attractive, though they represent only a stage in the process of migrating operations into a cloud. Without a plan that would also coordinate the re-alignment of client devices, increasing security and up-time reliability the virtualization savings would include an element of risk that is not present in ongoing operations.  However, the most important issue concerns the decision how to configure the new data processing environment. Virtualization would reduce the number of servers from 10,000 to only 521.

Where and how the new computers would be located requires a rethinking about the management of much smaller data centers operated by a much smaller complement of operating personnel.

Server virtualization should be therefore seen not as merely as a technical means to achieve the consolidation of computing but primarily as a managerial challenge how to start the migration into the cloud environment.


* http://roitco.vmware.com/vmw/. This calculator is the result of work done by the Alinean Corporation. Strassmann was founder and member of the original Board of Directors.