The goal of Information Superiority is to deliver a capability where:  Every data collector makes information available, in real time, for use by all other /warfare/ nodes. Every sensor is connected via standard interfaces to make local data globally accessible. *

What metric will confirm that Information Superiority is achieved?

The simple answer is that DoD will have to operate a network where the latency (defined as request-to-response time) will always meet the required response time within tightly defined statistical control limits.

In warfare situations the required latency will be dictated by the speed of the response to react to a threat. In an administrative situation the latency will be dictated by the workflow of business processes.
Unfortunately, in DoD there is no difference between the latency of warfare and the processing of administrative transactions. They are intermingled on the same networks. Only networks that are dedicated to the control of weapons can be exempted from DoD network latency standards.

In any discussion of DoD networks the latency metric must become one of the primary criteria for the design of circuits, data centers, security and applications software. The latency of an end-to-end system is the result of the interactions of every one of its components. For this reason the current separation between the management of systems acquisition and on-going operations is not tenable. Acquisition and operation or interlinked by performance and cannot be treated separately.

The adoption of standard latency metrics for all of DoD is mandatory. With thousands of applications, operating in thousands of networks, connecting hundreds of data centers and millions of personal computers the system responses will be paced by the latency of the slowest application.
Standard DoD latency metrics must mimic best commercial practices. Since the scope of Google is comparable to that of DoD an illustration is in order.

Google shows latency results for various grades of service in one minutes increments: ** 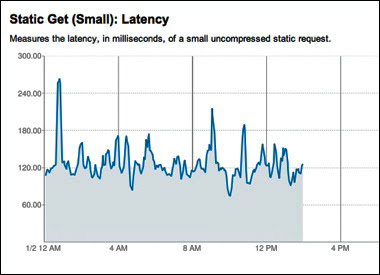 The latency in this case varies from 70 milliseconds to one instance of a 240 milliseconds peak, with a median of 120 milliseconds (0.120 seconds).  That is comparable to the speed of a keystroke.  For all practical purposes that can be considered to be near instantaneous.

Latency speed has now become one of the key parameters for network architects and designers. Both Google and Face Books consider the speeding up latency as one of the prime influences in improving user acceptance. The race for speeding up latency is particularly present in the financial services industry where direct optical links have been constructed to reduce latency of financial trades down to 13 milliseconds. ***

SUMMARY
The current DoD practices either overlooks or minimizes the importance of measuring transaction performance. For instance, one of the largest DoD systems is satisfied by reporting only multi-day “user satisfaction” indicators, based on random sample questionnaires. Such measurements are unsatisfactory because latency is an instant event.  It must be measured using a statistically 100% valid set that includes every instance.

The transaction latency will have to become one of the key design and operating parameters of cyber operations if DoD networks will meet information warfare objectives.