With the growth in the size of computer networks the monitoring of operations rises in importance. There are a large number of networks that manage hundreds or even thousands of servers.

Such large aggregations of equipment require the monitoring of up-time, latency, capacity and response time. To take advantage of technological expertise, control of fail-over in case of a defect and very large economies of scale all server operators rely on Network Control Centers (NOC) for monitoring networks as well as all of the attached assets.

The software used by large NOCs is always customized for proprietary configurations. However, there are numerous vendors that make NOC monitoring technology available. To illustrate the scope and some of the features of NOC monitoring we will use the Nagios Open Source software for WikiMedia. **

As shown below, WikiMedia had 405 servers up, 7 down out of 1960 servers available but not used. 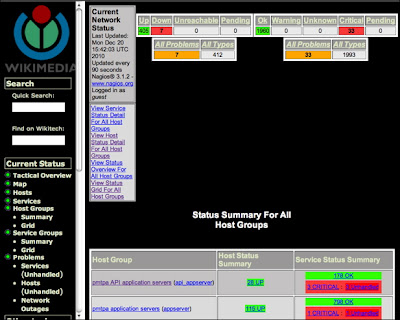 A wide range of diagnostic routines and statistics is available for operators for taking remedial actions. NOC personnel can narrow all reviews for a detailed examination of the status of each server: 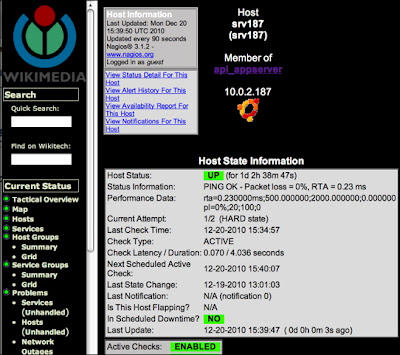 The tools that are available for NOC operations will represent a major investment for DoD. In the case of NMCI these tools represented a major share of “intellectual capital” that the Navy had to pay for as a part of the migration to NGEN where NOC software will be government owned.

Any future DoD network will have to consider tight integration between NOC operations and the Global Information Grid. The personnel and the software in the NOC represent the first line of defenses for assuring the security of cyber operations.