There are several economic models for projecting the Total Cost of Ownership (TCO) of computing. The leading firm that created such models is Alinean. This firm, where I was one of the founders and on the original member of its Board of Directors, has delivered several versions of TCO calculators to firms such as HP, Dell. Microsoft, IBM and Citrix. The most comprehensive model for calculating the costs of desktop virtualization is shown below and is available from VMware (http://roitco.vmware.com/vmw/).

The following describes some of the assumptions used in the calculations of the TCO for the placement of one million virtual desktops in DoD. It should be used as a basis for projecting the savings that are potentially available from the estimated seven million DoD desktops, laptops or smart-phones that are already in place for military, civilian, contractor, reserves, national guard and retired personnel.
By signing up to the VMware or Citrix calculators from Alinean any reader of this blog can enter into them their own assumptions and compute a range of potential saving opportunities.
The TCO calculator is based on an entry of initial requirements:

Virtualization will have the following configuration: 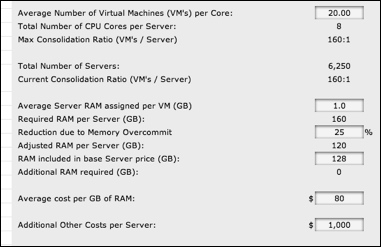 The greatest savings will be realized form administrative labor for a total of five-year labor savings of 19,339s FTEs. However, downtime, deployment and help desk will also add up.

For the TCO conversion to one million virtual desktops we get the following table: