Apps – the Future of Mobile Computing

How are smart phones and net pads different? They are mobile devices that deliver universal computing ability and connectivity. They can be thought of as handheld computers with voice telephone features. They allow a user to run applications that satisfy the entire range of rapidly changing personal computing needs. They include operating systems that provide a platform for application developers.

Such mobile devices include powerful processors, abundant memory and screens that are sufficiently large to offer displays that are sufficient for most needs. However, the most important feature is found in the ways in which these devices accept “apps” constructed by individual developers.  The leader in this field is Apple.

As of June 2010 there were 225,000 apps available on-line from the Apple Store, from where over 5 billion software applications were downloaded. The apps were often developed by thousands of individual developers. The following is a small sample of what is shown in the Apple Store:

These finger-size touch screen accessible icons down loaded by a user to their iPhone or iPad. A touch on the screen will instantly retrieve the complete software application.
Shopping in the Apple Store is easy. Every icon has a detailed description, such as: 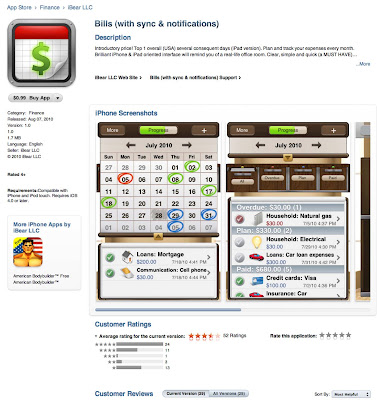 The price for the above app is $0.99 for a perpetual license. It includes a listing of technical specifications, application documentation, screenshot examples and the distribution of fifty-two customer ratings along with write-in comments from twenty-nine users.

This “Bills” application was authored by iBear, LLC, which is a very small company specializing in applications for mobile computing such as smart phones powered by companies such as Apple, Google/Android, Blackberry and Windows Mobile. These applications have been translated into eighteen languages where they are open for independent review and discussion over social networks such as Facebook and Twitter.

For example, only apps created by means of the iOS, the Apple's mobile operating system, are available in the Apple Store. Apple does not permit the iOS to use third-party hardware because it is closed and proprietary, which includes lock-down of any application. iOS also imposes a centralized approval process for any updates and can remotely disable all already published apps. Such restrictions make sense to assure warranted security as well as software quality.

There are other organizations, such as Google and Intel that have adopted idea that software should be made available as modular and ready-to-use  “apps”.  However, what matters is the business model which now makes mobile computing completely different from what has been the CIOs approach to application delivery over the past fifty years.

The availability of vast number of commercially available, fully tested, monitored, customer reviewed and inexpensive applications simplify the deployment of information systems in the Department of Defense. Mobile computing apps offer a different business model for the fielding of software. The “off-the-shelf” readily deployable apps offer the following advantages:

1. A standard DoD development methodology as well as a standard DoD computing environment makes it possible to produce result-focused software. Such a standard environment is not only technologically feasible but also offer large cost reductions.
2. Developers (e.g. contractors) would be able to reuse software components and apply standard systems development tools to the production of quality software. With much of the support infrastructure already included the amount of code needed for applications will be reduced. Bug defect elimination and software quality testing will be enhanced.
3. The modularity of applications enables small firms to compete for the DoD business. The placement of certified apps on DoD networks for experimentation (e.g. “beta” versions) will be encouraged.  Developers can be paid on a per use basis, with payments handled through the DoD acquisition organization.
4. Security assurance of computer code will improve since each app package will be small and modular for certification. Security infections can be limited to isolated apps and be remedied by issuing new versions.

DoD should change from building applications, which call for costly and time-consuming projects that deliver complete functionality that includes infrastructure, data and displays. Instead, DoD should view all computing as a platform that delivers applications in mobile man-machine interactions. Adopting the new business model for mobile computing should simplify use, increase security and reduce costs.
Email ThisBlogThis!Share to TwitterShare to FacebookShare to Pinterest