Why DoD Must Reduce Costs

On July 22, 2010 a Task Group of the Defense Business Board, appointed by the Secretary of Defense, delivered initial observations on “Reducing Overhead and Improving Business Operations”. The observations include a number of facts that should be relevant to cyber commanders: 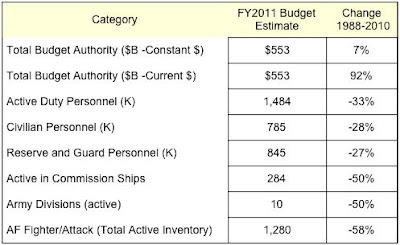 3. There has been a steady rise in non-payroll costs for DoD personnel. In FY10 this accounted for $22.5 Billion such as for TRICARE, family separation allowances and survivor benefits. Total retiree outlays for military personnel were $46.7 Billion in FY10.

Conclusion: The trend of rising non-payroll costs will reduce the amount of money available for active duty and civilian personnel.

Conclusion: A 24% share of the GDP deficit is unlikely to be sustainable.

Conclusion: If the Federal Budget, in 2040 $s is $12.3 Trillion, it would support $1.4 Trillion for Defense, or double the current FY 2010 budget. However, the rise in non-payroll costs is likely to absorb most of Defense budget increases over a thirty-year period.

6. DoD overhead costs, which are concentrated in Administration, Logistics, Finance and HR systems, have an estimated total cost of about $212 Billion. This is approximately 40% of the total DoD budget (SOURCE: Slide 16 of Defense Business Board report).

Conclusion: Information technology should be considered as a premier tool for reducing overhead costs by means of systems simplification and through business process improvement.


The costs of DoD information technologies for FY10 are $33.7 Billion for O&M costs plus compensation of an estimated number >200,000 of military and civilian personnel at an average cost of $130,000/year (approximately $26 Billion). This represents about 10% of the total DoD FY10 budget.