The information requirements for the Information Dominance Corps, which combines the Navy's
intelligence and information technology capabilities, will create an unprecedented increase in the demand for information services:
Translating these requirements into an operating environment will:
To link the shooters to the data cannot use Google like key-word extraction methods. Only a semantic web, in which the computer network relates the relevance of data to a shooter's local situation can deliver what is necessary for meeting information dominance requirements.

The deluge of video data from these unmanned aerial vehicles, or UAVs, is likely to get worse. By next year, a single new Reaper drone will record 10 video feeds at once, and the Air Force plans to eventually upgrade that number to 65. Chief of the Intelligence, Surveillance and Reconnaissance Division of the U.S. National Geospatial-Intelligence Agency, projects that it would take an untenable 16 000 analysts to study the video footage from UAVs and other airborne surveillance systems. (http://spectrum.ieee.org/robotics/military-robots/the-uav-data-glut).

The semantic web makes it possible for computers to understand what can be extracted from huge files in the context of a shooter's unique inquiry. The key to such a capability is the availability of machine-readable metadata that provide the logical tags for connecting  related information. This makes it possible for automated agents to search and then display information from globally distributed databases.

The stated Navy Information Dominance vision calls for the delivery of the most ambitious operational concepts ever conceived, anywhere. None of the existing commercial designs, such as Google, are comparable in scope.

The systems planners for the Information Dominance capabilities should now consider proceeding with cloud designs that will function according to the stated vision.

Starting with virtual servers, virtual desktops, data virtualization and network virtualization will place the Navy on a path that may take at least a decade to achieve. 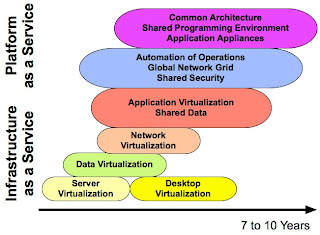