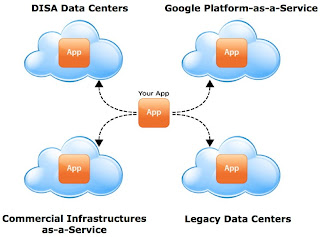 Google offers much more than just Storage for Developers. They keep packaging pieces of their million-plus server data center network in the form of focused special purpose offering. Storage for Developers should be seen as marketable service aimed at dealing with specific proprietary features offered by Amazon.

The Storage for Developer is a part of a much larger Google App Engine offering. For further details see
http://code.google.com/appengine/docs/whatisgoogleappengine.html
For instance, the data store feature is an App Engine distributed data storage service that includes a query engine and transactions.

The Platform-as-a-Service offering that I mentioned represents the start of a series of technology collaborations with Google to deliver solutions that make enterprise software developers more efficient at building, deploying and managing applications within any cloud environment.

The "commercial infrastructure-as-a-service" shown are for firms such as Amazon.

There decision which which cloud solution the the Department of Defense should pursue will depend on the economics of how to proceed with migration of legacy applications.

You can buy storage both from Google and from Amazon except that the Google storage is relocatable, whereas the Amazon storage can be moved only with reprogramming.
Email ThisBlogThis!Share to TwitterShare to FacebookShare to Pinterest